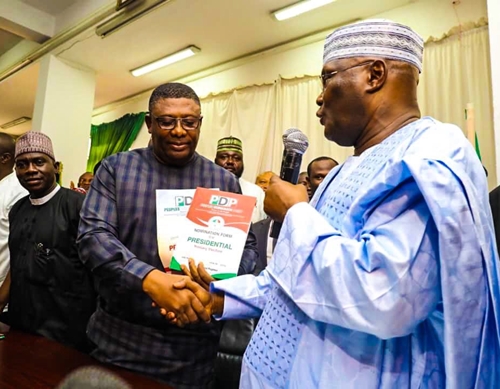 2019 presidential aspirant on the platform of People’s Democratic Party (PDP) ahead of next year’s general election, Atiku, has submitted his forms today in Abuja.

TORI News had earlier reported today that Alhaji Atiku Abubakar, and his supporters, took over the major streets leading to Wadata Plaza, the headquarters of the Peoples Democratic Party (PDP) in Abuja, to submit his Expression of Interest and Nomination Forms .

Photos have now emerged online showing the moment the influential politician submitted his forms ahead of the 2019 Presidential election.

Atiku who shared the photos on his social media pages wrote: “I have just submitted my nomination form to the @OfficialPDPNig to officially declare my intention to seek the nomination of the party to run for the office of the President of the Federal Republic of Nigeria in the 2019 elections.”