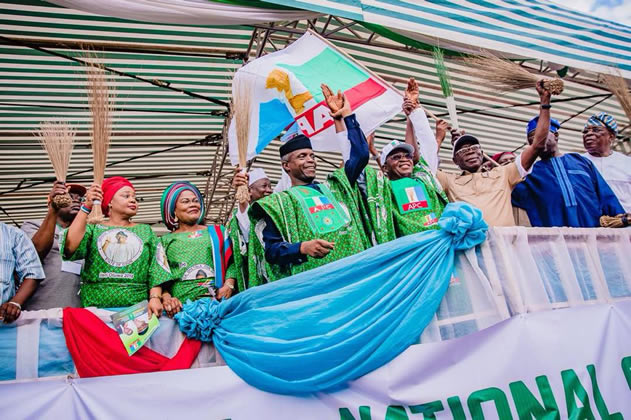 Vice President Yemi Osinbajo ( SAN), National Chairman of the All Progressives Congress, Adams Oshiomhole, Asiwaju Bola Tinubu and some governors of the ruling party stormed Osogbo, the Osun State capital on Thursday to solicit for votes for the governorship candidate of the party, Alhaji Gboyega Oyetola.

Oshiomole, who canvassed for votes for Oyetola, said the APC candidate was the best among the hordes of the candidate seeking to succeed Governor Rauf Aregbesola whose tenure would expire on November 26, 2018.

He said Aregbesola’s administration had brought unprecedented development to the state, stressing that Oyetola, who had been a key member of the administration was the best to take over from his principal in order to continue with the development agenda.

“No one can help you to govern if you don’t have the skills and the capacity to do that. Our candidate, Gboyega Oyetola, is a successful businessman and has worked as a loyal Chief of Staff to Governor Aregbesola. We are not presenting an apprentice to you but a trusted and tested man and we ask you to vote for him.”

Tinubu also described Oyetola as a reliable person, saying he was with them during the struggle to reclaim the mandate of Aregbesola.

He said that the APC candidate did not betray them during the struggle but stood solidly behind Aregbesola until his mandate was restored.

The former Lagos State Governor said Oyetola was the engine room of the Aregbesola administration, saying he was not a stranger who would begin to spend a lot of time to learn about governance.

He said, “Oyetola was chosen as the APC candidate in Osun to help the state to prosper like Lagos. The foolish ones are calling him an agent. He is here to help you develop the state.

“Youths, keep calm, Oyetola is unlike some corrupt politicians who were with us but with the intention to deceive us and loot from the treasury.”

Aregbesola urged members of the party to continue to work hard and keep campaigning for the candidate of the party in order to win the poll.

Oyetola said he had been trained and he was now competent to take over from his principal. He called on the people of the state to support him while promising to continue with the developmental projects of Aregbesola.