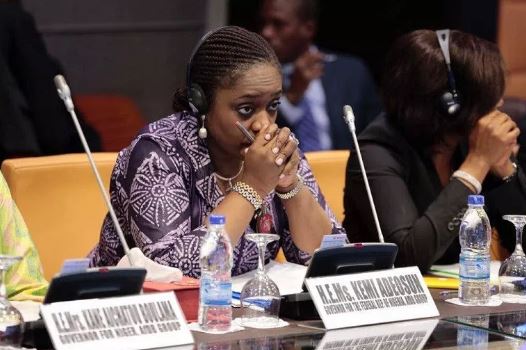 Former minister of finance, Kemi Adeosun has been spotted at the Abuja airport, flying out of Nigeria after her resignation.

Mrs. Kemi Adeosun, The immediate past Minister of Finance, has left Nigeria to London, United Kingdom.

According to Sunday Punch, multiple sources at the airport confirmed her departure on Saturday night.

Adeosun, who resigned her appointment as finance minister after being indicted by the National Youth Service Corps that she forged her exemption certificate, was said to have travelled with a British Airways flight to London.

The British Airways aircraft that she took to London according to sources at the airport left the Nnamdi Azikiwe International Airport at exactly 8:05am on Saturday.

One of the sources who pleaded not to be named as he was not officially permitted to speak on the matter said that the minister was sighted at the airport before she boarded the flight.

The source said, “The (ex) finance minister was at the airport this morning and she has travelled out of the country to UK.

“She left with a British Airways flight which departed the Nnamdi Azikiwe International Airport at exactly 8:05am.”

Attempts to get comments from the ex-finance minister’s Media Adviser, Oluyinka Akintunde, were not successful as repeated calls made to his mobile were not replied.

When contacted, the spokesperson for the British Airways, Yinka Kola, said, ‘Unfortunately, due to data protection laws, I am unable to provide that information as whatever all our passengers do are entirely private to them.”

The party insisted that she must be arrested and prosecuted for deserting national service and forging her NYSC Exemption Certificate in addition to alleged impropriety and abuse of office as minister.

The PDP asked Nigerians to note that President Muhammadu Buhari, whose administration it said had become notorious for shielding its many fraudulent and corrupt officials, could not summon the rectitude to sack Adeosun.

The party added that she would have still been in office, if not for the sustained uproar by Nigerians and international creditors.

The party’s National Publicity Secretary, Mr. Kola Ologbondiyan, said in a statement in Abuja that the Federal Government, which earlier made efforts to defend Adeosun, had already perfected a plot to help her to evade prosecution.

He said that the Federal Government was afraid that her prosecution could make her to open up on the alleged humongous corruption going on in the financial sector under the Buhari administration.

The party said, “Furthermore, we are also aware that President Buhari was not by any measure prepared to drop her from his cabinet but for the demand by those responsible for her appointment, who protested her continued stay in office, although for their own selfish gains. A case of corruption fighting back!

“The PDP, therefore, demands an immediate open inquest into the records of the Finance Ministry under Adeosun, to unravel all improprieties by the Buhari Presidency cabal, including alleged diversion of oil proceeds, fraudulent oil subsidy deals, leading to high fuel price; depletion of our foreign reserves, embezzling of funds returned by Switzerland and other huge sleazes in the ministry.

“The party also insists that President Buhari must be held responsible for all infractions in the finance ministry under Adeosun, as he appointed and retained her despite having information on the certificate forgery; a situation that confirms the decadence and lack of due diligence in the Buhari Presidency.”