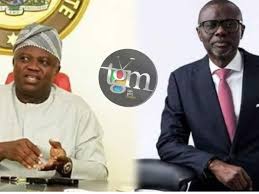 Babajide Sanwo-Olu who is the latest anointed candidate of Asiwaju Bola Ahmed Tinubu has floored Ambode in some of the results trickling in.

The much anticipated ward primaries of the Lagos State chapter of the All Progressives Congress (APC) commenced with incumbent Governor Akinwumi Ambode fighting for a second term ticket against his major rival, Babajide Sanwo-Olu, who reportedly has the backing of the State Party hierarchy as well as national leader of the APC, Asiwaju Bola Ahmed Tinubu.

Babajide Sanwo-Olu, a governorship aspirant of the All Progressives Congress (APC), is presently leading Akinwunmi Ambode, governor of the Lagos state in the governorship primary election trickling in.

According to a report by TheCable, Olanrewaju Yahaya, the electoral officer in charge of the ward, announced that Sanwo-Olu polled 960 votes ahead of the governor who secured just 4 votes.

Paper slip holders are not allowed to vote in Ward F Ojokoro LCDA according to reports.

Other result making the rounds on social media could be seen below: