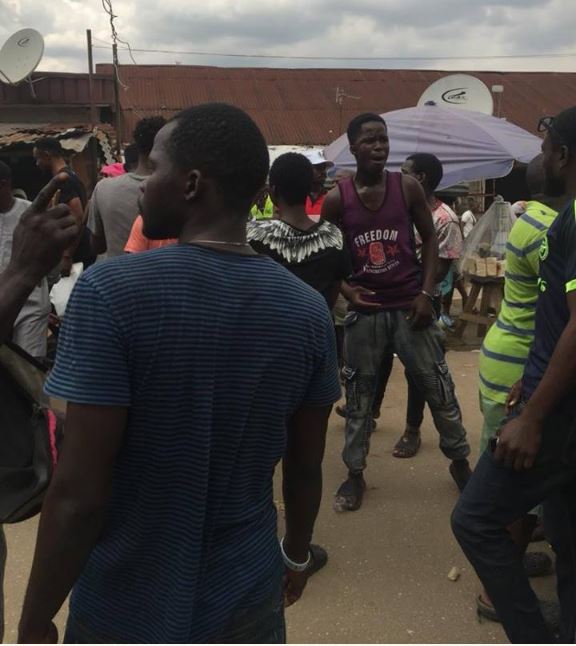 Ahmed Bola Tinubu threw some cash at some of his supporters hailing him as he exercised his political rights.

The national leader of the All Progressives Congress, APC, Ahmed Bola Tinubu, arrived Ward C in Alausa, Lagos State, few moments ago to acknowledge his supporters as the party’s governorship primary continues in the state.

It was gathered that Tinubu reportedly dropped some money with the ‘Alausa boys’ on his arrival. This later degenerated into chaos, and unsettled the ward as they dragged for the cash.

According to reports, a man (seen in the picture above) gave his colleague a slap after he asked him for his share of the money.

Olanrewaju Yahaya, the electoral officer of the ward announced that Sanwo-Olu polled 960 votes ahead of the governor who secured just four votes.

In other news, It was no tea party for journalists covering the country home of Governor Akinwunmi Ambode, in Epe area of the state, in the on-going All Progressives Congress (APC) gubernatorial primary in the state as they were allegedly chased away from the town by an aide to the governor.

The journalists had assembled at the ancient town hoping to report the exercise from the home base of the governor and had converged there as early as 9:13a.m when the aide came to asked them to leave the town.