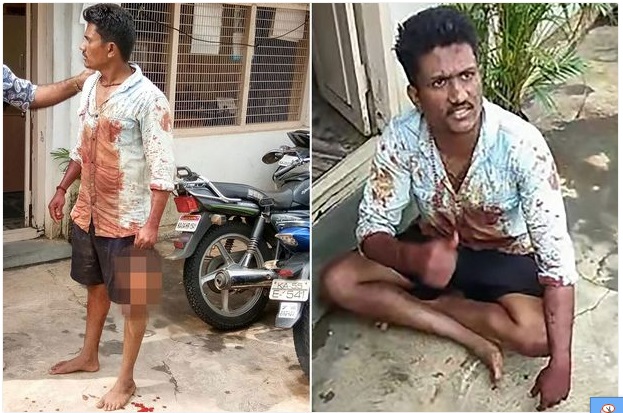 A man has reportedly killed his friend and brought his decapitated head to the police station to turn himself in.

A 28-year-old man, Pashupathi has shocked many by bringing the decapitated head of his friend he killed over an altercation in India.

According to Mandya SP Shivaprakash Devaraj, Pashupathi killed Girish following a scuffle when the victim spoke ill of the accused’s mother.

Police officials at Malavalli Police Station in Mandya district of Karnataka are no strangers to witnessing and investigating gory crimes.

But the officers on Saturday flinched when a man nonchalantly arrived at the police station on a motorcycle and walked in with the severed head of another man in his hand.

Police officers at the station scrambled to apprehend the man in the bizarre incident and are currently investigating the death.

Incidentally, this is the third such beheading in Karnataka this month, and that too, two days after a similar incident was reported at Kolar’s Srinivaspura police station.

According to Mandya Superintendent of Police (SP), Shivaprakash Devaraj, the 28-year-old accused Pashupathi brought the severed head of Girish (28) to the town police station in Malavalli, at around 10.15 am on Saturday.

“We are investigating the incident, but the accused and the victim were good friends. It appears that the victim died in the morning, just before his head was brought to the station,” confirmed Shivaprakash.

According to the police, Pashupathi brought the severed head to Malavalli from Chikkabagilu village, where the duo resided. “He (Pashupathi) informed the police officials that Girish spoke ill of his mother, which triggered a fight between the two,” added the SP.

In the first incident in early-September, 35-year-old Satish reached Chikkamagaluru’s Ajjampura Police Station, holding a bag in one hand and a machete in the other, claiming he had killed his wife. In a video shot by an official at the police station, the man is even seen narrating the details of the murder.

He said that he followed his wife on the suspicion that she was cheating on him. Satish hacked her neck near the Nilagiri Plantation when she met with Sunil, the man she was allegedly in love with.

The bizarre trend of men walking into police stations with severed heads has made police officials across the state sit up and take note of such crimes.

“We are aware of the incidents in Chikkaballapura and Chikkamagaluru, but we have not yet fully investigated the incident to tell if the accused was influenced by the news of similar incidents elsewhere,” said Shivaprakash.