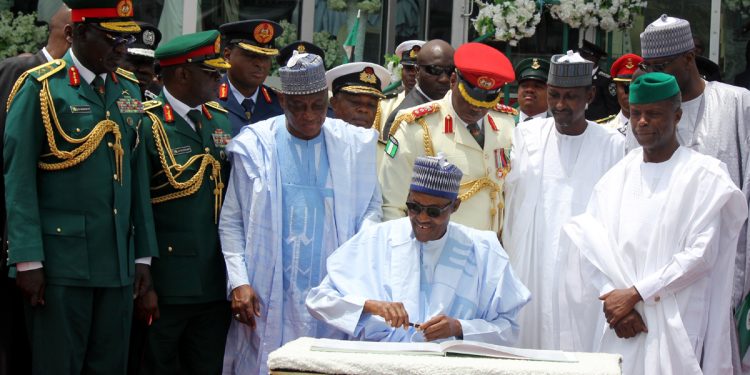 Senate President Bukola Saraki and the Speaker of the House of Representatives, Yakubu Dogara, were conspicuously absent at a parade organised to commemorate Nigeria’s 58th Independence Day anniversary on Monday.

The venue of the parade was the Eagles Square, at the Three Arms Zone, Abuja.

Recall that Saraki and Dogara recently defected from the ruling All Progressives Congress (APC) to opposition Peoples Democratic Party (PDP).

Saraki and Dogara as number three and four citizens, respectively, usually are in attendance at national events.

Also in attendance at the parade was the Chief Justice of Nigeria, Justice Walter Onnoghen.

Former President Olusegun Obasanjo was also absent at the event.

On arrival at the venue, President Buhari first took the national salute before moving to inspect the parade in a motorcade.

He later returned to the VIP stand to join Osinbajo, Onnoghen, Gowon, Abdulsalami and other dignitaries.

There were also displays by policemen, men of the Nigerian Army, Nigerian Navy and Nigerian Air Force.

Highlight of the displays included the aerial display by men of the NAF.

The display featured 22 aircraft of which 18 were said to have been acquired during the President Buhari’s administration.

The Independence Day anniversary event was the first elaborately celebrated since 2010 anniversary.

The 2010 event, under the administration of former President Goodluck Jonathan, which marked the nation’s 50th independence anniversary, was marred by bomb blasts allegedly masterminded by members of the Movement for the Emancipation of the Niger Delta (MEND).

Since then, the Federal Government had observed a low-keyed celebration with the October 1 event holding at the forecourt of the Presidential Villa, Abuja.

Meanwhile, the Secretary to Government of the Federation (SGF), Boss Mustapha, has said the country has every reason to celebrate.

Speaking to journalists at the Eagle Square, Abuja, after the grand finale of events commemorating this year’s celebration, Mustapha said: “We have to be reflective with this particular situation. The last time we had such a celebration was in 2010, which was our centenary celebration so for the last eight years we have not had any major celebration and we felt strongly that we are losing trend with our tradition and our history.

“A child born seven years ago has no idea whether we celebrate our national day so I want us to look at this particular incidence today with retrospect and appreciate the fact that we have come a long way and God has been faithful to us as a nation.”

Mustapha praised President Buhari for adequately addressing security challenges confronting some parts of the country by taking the needed steps.

He continued, “Most of the equipments our military boasts of today especially those displayed during Monday’s celebration were acquired during this tenure of President Muhammadu Buhari.

“As you heard from the Air Force commentator, President Buhari that about 23 war planes have so far been acquired so it means that in the last couple of decades we have not paid much attention to the acquisition military hardware to effectively be able to fight the insurgency and other forms of security challenges that we have had in the country.

“Now that we are acquiring more, you can see that there is relative calm in the North-East. Even the banditry in the North-Central and North-Western areas is being checked effectively and I believe it will be a continuous thing because the problem keeps propping up but as that happens, we will deal with the problem,” he assured Nigerians.

The SGF assured that government would not relent in dealing with any security challenge because “the primary responsibility of government is to secure this nation and provide for people to be able to pursue their various enterprises, it’s our responsibility and we will do that.”

Also speaking, Defence Minister, Brig.- Gen. Mansur Dan-Ali (rtd.) said the display of hardware by the country’s Armed Forces at the event showed the world that the military are capable of defending the territorial integrity of Nigeria at all times.

“The military is the pride of the nation thus you need to showcase what you have and what you are capable of doing and what we displayed today shows our capability at all times,” he said.

Meanwhile, some youths wearing black shirts took to the arena at the end of the celebration chanting solidarity songs in support of the president’s 2019 Presidential election.