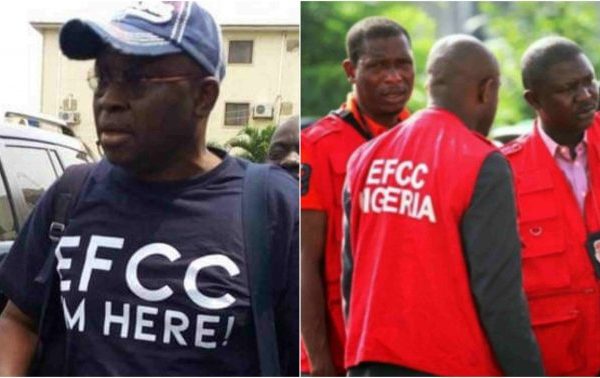 The Economic and Financial Crimes Commission (EFCC) has been accused of keeping the immediate past governor of Ekiti State, Mr. Ayodele
Fayose in detention just to satisfy the powers that be since it lacked the required evidence to prosecute him.

Fayose’s Media Aide, Lere Olayinka, said in a statement issued on Thursday that it was laughable that EFCC was still telling the same
stories that it told the public in 2016 and has been unable to charge the former governor to court since Tuesday that he willingly submitted himself to the commission.

Olayinka said; “With the deafening noise that they made about the evidence of corruption in their possession and even going by the EFCC
ignoble tweet of July 15, 2018, in which the commission expressed its readiness to prosecute the former governor immediately he no longer enjoyed immunity, Nigerians had expected that by now, he will be facing trial in court.

“However, because the EFCC does not have any evidence against Fayose, the commission has opted to keep him in detention so as to satisfy its paymasters whose major agenda is ‘Fayose must be kept out of circulation by whatever means.’

“If not that they are just interested in keeping him out of circulation, why is the anti-graft commission not in court to prosecute him with the ‘overwhelming evidence’ it claimed to have?”

Olayinka, who said Fayose will remain strong in his fight against tyranny, urged Nigerians to ignore any story coming from the EFCC
because “Peter Ayodele Fayose has denied all their allegations and he won’t say anything more than what he has said on Tuesday.”

He assured Nigerians that Fayose was prepared to stay in detention for as long as the EFCC will be ready to take him to court where he will
have the opportunity to defend himself.

“The former governor will not say more than what he has said, which is denying the EFCC allegations. He has also told the commission that he does not have any trust in them, having openly displayed bias against him and showed that they were persecutors instead of prosecutors.

“He is waiting to be charged to court whenever they are ready.”