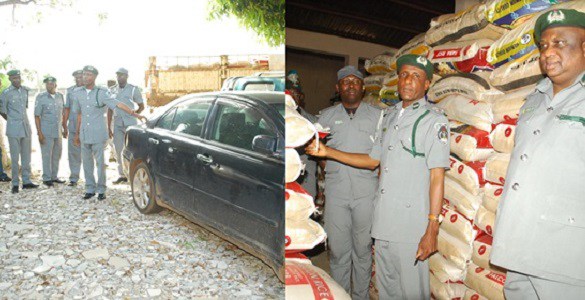 The Nigeria Customs Service (NCS), Niger/Kwara/Kogi Area Command on Wednesday said it has seized no fewer than nine hundred and thirty four (934) 50kg bags of imported foreign rice suspected to have been smuggled through the land border in the three states within October.

Customs Area Controller in charge of the three states, Yusuf Abba Kassim made this disclosure while briefing journalists at a press conference held at the headquarters of the command in Minna, Niger State capital.

Kassim said, “These strategic seizures were made in the month of October alone: nine hundred and thirty four (934) 50kg gags of imported foreign Rice suspected to have come in through the land border with a duty paid value of one hundred and sixty million, sixty six thousand seven hundred naira (N160, 066,700).

“One used Volkswagen Golf with duty paid value of One Hundred and Eighty Thousand Naira (N180, 000).

“I resumed here in the Command on Monday 13th August, 2018 determined to build on the success records of my predecessors both in revenue generation and anti-smuggling activities. As we all know, the Nigeria Customs Service is very strategic in the sustenance of the Nation’s economy.

“I recognize the critical role the media can play especially in the area of sensitization and enlightenment to all our stakeholders and the society at large. This is why I have called this briefing to partner with the media in order to achieve willful compliance from the public as well as to showcase what the Command is doing.

“I took it as my first point of duty to visit all the head of sisters agencies, traditional rulers and Customs formation within the Command to recognize them, strengthen the co-existing cordial relationship between the Command and the critical stakeholders as well as to solicit for greater cooperation in terms of information gathering and dissemination. The results of the action coupled with the Command’s renewed vigour in utilization of cutting edge strategies in our anti-smuggling war.”

“I want to use this medium to reiterate that the current administration of Customs under the able leadership of Col. Hammed Ibrahim Ali (rtd) has zero tolerance for corruption and revenue leakages in all its ramifications and the Niger/Kwara/Kogi Area Command is committed to enforcing same. We will continue to police our area of operation in line with the Comptroller General’s zero tolerance for smuggling as well”.