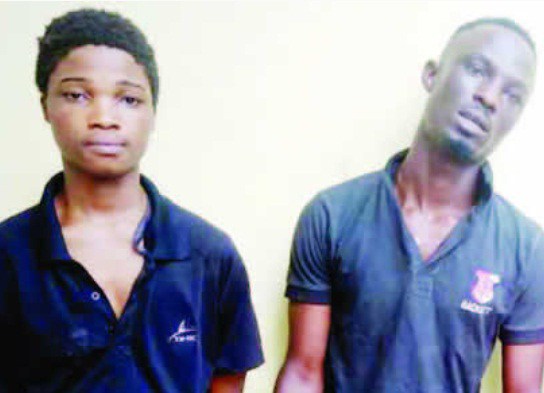 A 20-year-old student of the Imo state university IMSU, Samuel Ekani, has been arrested by men of the Federal Special Anti-Robbery Squad, for allegedly being a member of a robbery gang.

Parading the suspect before newsmen, the state commissioner of police, Dasuki Galadachi, said Samuel was arrested alongside a 26-year-old man, Richard Ikenna, who had been on the police wanted list for armed robbery.

The suspects are reportedly members of the secret club, Vikings confraternity.

”During the arrest, Richard Ikenna, who had been on the wanted list of the command for armed robbery and murder, sustained gunshot injuries on his right leg. One of their victims, Paul Anyanwu, 37, who narrowly escaped death after being robbed by the gang, has identified them.

They were arrested at a hotel along Works Layout in Owerri. One locally-made pistol, a double-barrelled pistol with three unexpended and one expended cartridges were recovered. The suspects are Richard Ikenna from Owerri Municipal and Simon Ekani, from Rivers State.” he said

The commissioner of police said once investigation is completed, the suspects would be arraigned in court.