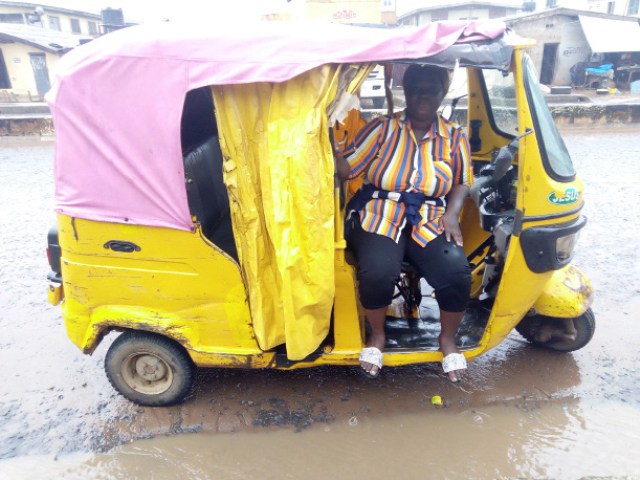 Being a woman in a man’s world is a challenge and many women are taking up the challenge. Women with the encouragement of government as well as non-governmental agencies have begun taking up more opportunities that were once out of their reach. Abiwo Bukola, popularly called “Sisi Mi”, a popular female tricycle rider, plying the Iju- Fagba route in the Iju-Isaga area of Lagos is one among the rising number of women who have joined in the public transport system in Lagos. While it may still be a little strange for some people, it is gaining more popularity and is becoming the source of income for many women in the state. She has been able to survive the rough life of Lagos motor parks, providing the basic needs for her family in the process. MARY OMENUME speaks with “Sisi Mi and she shares her experiences and aspirations.

Is your real name Sisis Mi?

My real name is Abiwo Bukola but people call me Sisi Mi. I am from Ilaje- Ese Odo Local Government Area of Ondo state. I was born and brought up in Lagos state and had my primary education at Oshodi. I also started by secondary school at Oshodi before coming down to Amhadiya where I did my Islamic school. Then I got transferred to Ekiti state where I completed my secondary school education. I also have a higher degree from the National Teachers Institute, where I studied Physical and Health Education.

After that I got a job as a teacher in a private school, that was in 2003. But I was not happy, the salary was small. And so after some time, exactly 12 years, I decided to resign and became a tricycle rider. I’ve been in this business of riding tricycle since 2015. I have two sons.

Why did you leave your teaching job to ride Keke Maruwa?

How did you get into the business?

I just needed something that would be giving me money on a daily basis. I was actually advised to take up commercial bus driving, I did that for a while before I was again advised go into tricycle business. Initially I felt it was absurd, but when I saw two, three females riding on the road I was like oh! I can do more than that, I just summoned the courage and took it up and since then I have been doing it with the grace of God.

What are the challenges you face on the job?

For one there are the so called “agbero” they would tell you, “don’t load here, don’t load there, don’t do this don’t do that, move to that next bus stop” and so many things that they do. Another challenge is if the “keke” breaks down, looking for money to repair it at times becomes difficult because being a single mother, whatever I have I use it to pay my children school fees, pay house rent, buy foodstuffs and so on. Of course you know the hazards of being on the road.

Do you get treated differently by passengers, by road users, by touts because you are a woman?

It is 50-50. There are some passengers that are very cruel, they talk to you anyhow, they harass you even if you make a little mistake and even without making mistake they do look at us as if we are nobody but we have some people who are very friendly, they would take you the way you are. Not only that, they try to encourage you. I have so many customers that would tell me “Sisi Mi have this for your lunch” so these are the different sets of people we meet every day.

How much do you make for instance daily from this business?

It is not an easy task, it not easy. I don’t make as much money as the men do because I have to take care of my children. I do take my last born to his school before I start work in the morning and in the afternoon I have to go and bring him back home. I also have to close early so that I can have enough time to sit at home to put him through his homework. That reduces the amount of money I make, but that is not always because sometimes I have to work all day.

If you had the opportunity, what would you do aside riding Keke Maruwa?