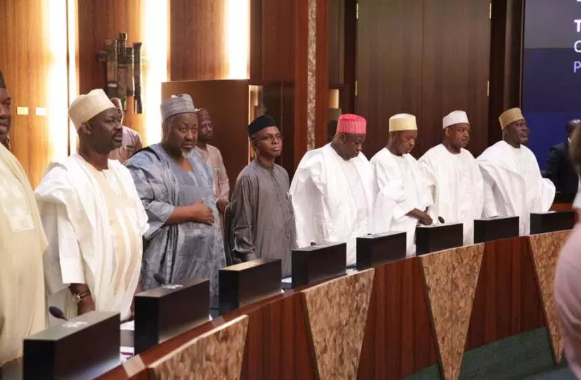 Contrary to the claim by Governor Kayode Fayemi that governors in Nigeria earn N500, 000 per month, the official monetised salary of a governor in the country is actually N648,580.62, findings from an investigation have shown.

Fayemi had said that professors in Nigerian universities earned as much as he earned, and that, in some cases, they earned more than him on a monthly basis.

He said that as a governor, he earned N500,000 monthly salary, arguing that a professor sometimes earned more than that.

The governor berated Nigerian academic for allegedly not taking advantage of certain opportunities which, he said, he was privy to.

However, a document, Remuneration Package of Political, Public and Judicial Office Holders, obtained from the Revenue Mobilisation, Allocation and Fiscal Commission by our correspondent in Abuja on Thursday, showed that there were other allowances which the governor was entitled to.

While a few of the allowances are paid periodically, there are others that are not monetised which the state provides fully, according to the preference of the governor.

The governor’s monthly salary is made up of three items – basic salary, hardship allowance and constituency allowance.

Other allowances of the governor that are not part of the monthly emoluments are 10 per cent leave allowance which amounts to N222,370.50 per annum.

Should a governor so desire, he is entitled to 400 per cent Motor Vehicle Loan which amounts to N8,894,820.

When a governor completes his tenure, he is entitled to 300 per cent severance allowance, which amounts to N6,671,115. This is apart from what is provided by each state as pension and gratuity.

However, the majority of the allowances that a governor is entitled to are not monetised. This means that the state makes full provision for such items – to the taste of the governor.

Other allowances that are fully provided by the state for the governor are accommodation, furniture, duty tour allowance, estacode and medical.

According to the document, the annualised salary and allowances of the President is N14,058,820 while that of the Vice-President is N12,126,290.

On the face value, therefore, it appears that even the aides appointed to serve both the President and the Vice-President earn higher than these two key officials of the state.

However, the reason is that while most of the allowances of lawmakers, senators and presidential aides are monetised, the allowances that are supposed to be earned by the President and the VP are provided by the state – without any limit, just like the governor.

Apart from the salary, the regular allowances that are monetised for the President are only hardship allowance, N1, 757,350.50 per annum; and consistency allowance, N8, 786,762:50 per annum.

Other allowances that the President and the Vice-President are supposed to enjoy which are not provided in monetary terms include motor vehicle fuelling and maintenance, special assistant, and personal assistant.

Others are domestic staff, entertainment, utilities, security and newspapers/periodical allowances.

Two other officials of the state whose most allowances are not monetised but provided for by the state are the President of the Senate and the Speaker of the House of Representatives.

In the states, governors and Speakers of the State Houses of Assembly enjoy similar privileges.

These items, which are supposed to constitute allowances for the President and the VP are to be fully provided for these key office holders by the state according to the Remuneration Package of Political, Public and Judicial Office Holders prepared by the Revenue Mobilisation Allocation and Fiscal Commission and passed into law in 2007 by the National Assembly.

The country’s annual budgets give an indication of how much the nation spends on the items required by the President.

Following the outcry of citizens for a downward review of the emoluments of political office holders as a result of dwindling oil earnings of the country, President Muhammadu Buhari had in 2015 directed RMAFC to review the emoluments.

The work of the agency which was concluded in 2016 came to nothing as the President could not act on the report which was submitted to his office.