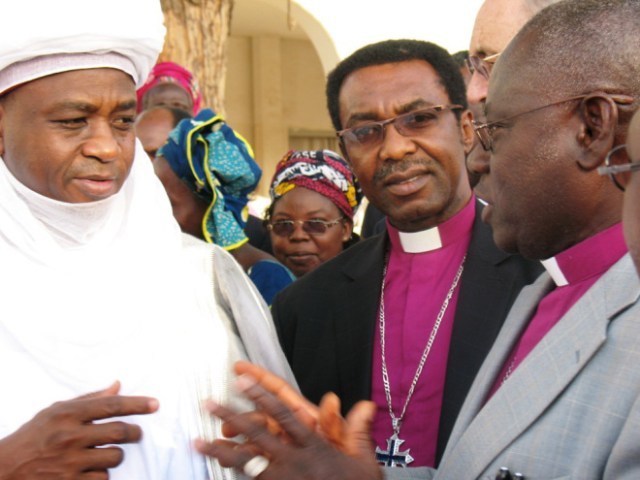 The Sultan of Sokoto and chairman of Nigerian Supreme Council for Islamic Affairs (NSCIA), Alhaji Sa’ad Abubakar III, and president of the Christian Association of Nigeria (CAN), Rev Samson Ayokunle, yesterday told members of their respective faiths that they the two religious bodies do not have a preferred candidate in the 2019 general elections.

Speaking at the 2018 second general meeting of Nigeria Inter-Religious Council (NIREC), youth wing summit, Abubakar said Nigerians must get their voter card and vote for responsible people who would work for their progress.

There is no bad or preferred candidate,” the Sultan said. “Every candidate is a good candidate; it depends on who wins at the end of the day”.

Abubakar urged Nigerians to resist attempts by politicians to divide them during campaigns, just as he called on the youths in the country to conduct themselves in a peaceful manner.

“You must conduct yourselves in a peaceful manner for the benefit of all Nigerians regardless of ethnicity, religion or geographical zone,” the royal father said.

While calling on Nigerians to hold President Buhari to his words that he will ensure violence free elections, the Sultan said the youths must take a stand that they would not be used by politicians and other stakeholders to cause violence in the forthcoming general elections.

Abubakar said that the second summit came at a time Nigeria was being politicised by the political, noting that there is need for Nigerians to sit as a family irrespective of their various religions.

He advised Nigerians to be united, saying the summit is aimed at contributing to peaceful participation of inter religious groups in the 2019 elections.

READ  My Two Graduate Children Don’t Own A Car, They Must Work For Their Own Wealth — Peter Obi

The Sultan urged the youths not to allow themselves to be used by politicians to instigate violence of any kind.

On his part, the president of CAN, Rev Ayokunle, urged Nigerian youths to work together irrespective of doctrinal differences, adding that the Christian body has no preferred candidate for the 2019 general elections.

“We should use our different religions to move the country forward,” Ayokunle said.

Specifically, the CAN president told the youths not to allow disgruntled politicians to use them as political thugs by providing them with drugs and all sort of weapons to attack their own brothers because of political differences, while their own children are schooling abroad.

He implored the youths to wake up from slumber and always see themselves as future leaders instead of falling cheap to selfish politicians.

“Our youths should stay peacefully and not allow selfish politicians to use them in breaching the relative peace in the country. Whoever approaches you for thuggery, ask him to lead you in the act,” the CAN president said.

“Any distraction or violence will only set our democracy backwards and affect all areas of human development,” Ayokunle added, noting that some of the challenges being experienced in the country are instigated by politicians.

In his remarks, the National Security Adviser to the president, Maj Gen Babagana Monguno (rtd) said there is no gainsaying that peaceful dialogue is the pathway to peaceful coexistence.

Monguno, who was represented by Brig-Gen Emmanuel Ndagi, noted that security is a collective responsibility, adding that Nigerians should stay peaceful.

Urging the youths to ensure that Nigeria achieves peaceful elections, the NSA said President Buhari was working to ensure free, fair, peaceful and credible elections in 2019.

He, however, added that the federal government, religious leaders, politicians as well as the youths had critical roles in preventing the use of social media to propagate fake news, hate speech and any act capable of instigating violence.

The United States Ambassador to Nigeria, who was represented by David Young, deputy chief of mission in Nigeria, said that the US was committed to supporting the Independent National Electoral Commission (INEC) to achieve credible elections in Nigeria.

Young, who commended the role of NIREC in mobilising Nigerian youths towards peaceful elections, urged the youths to practise their faith and put it into action by loving God and their neighbours with all their hearts,” adding that “for faith without works is dead.”

Also speaking, the Inspector General of Police (IGP), Ibrahim Idris, said government was working seriously towards the success of the forthcoming general elections

Idris who was represented by Assistant Inspector General of Police, Raheed Akintunde, warned that both vote buyers and sellers would be dealt with without fear or favour.