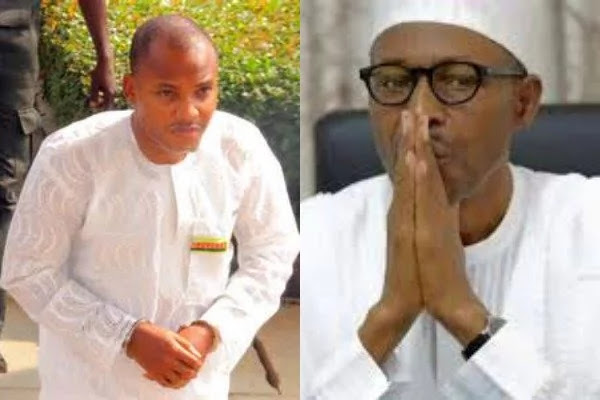 Leader of the Indigenous People of Biafra, IPOB, Mazi Nnamdi Kanu has claimed that a stage play artiste from Sudan, Jubril Aminu Al-Sudani, is still at the Aso Villa impersonating a ‘dead’ President Muhammadu Buhari because Nigerians have not staged mass protests to demand for proof of his true identity.

Kanu made the assertion during the weekend in a two-and-half-hour worldwide radio broadcast from Israel.

He said Nigeria would collapse under the weight of deception going on within the presidency if prompt action is not taken to inaugurate Vice-President Yemi Osinbajo as President and extradite Jubril Aminu to Sudan for what he described as international fraud.

His words: “Jubril is in Aso Rock. The reason he is still there is because we have not come for him. In any reasonable country around the world, the citizens should by now commence a worldwide protest to demand the identity of their president.

“Why is this Sudanese impostor in Aso Rock? Abba Kyari is nowhere to be found (for explanations). They said he went for medical treatment.

“Let’s ask Femi Adesina a simple question: ‘Presidency show us a video of Buhari in Paris.’ Perhaps, they may have a case (if he did) but there is none because Jubril wasn’t there. There was no Buhari in Paris.

“There was once a rumour that Obasanjo was dead but he came out and said ‘I dey kampe.’ Jubril can’t do that because he is not Buhari. Nigeria must fall. It is going to collapse under the weight of this fraud and deception of Jubril.

“I am not going to make trouble. I want them to return Jubril from whence he came. We can no longer be part of this fraud.”

Kanu, who accused the elite of hatching the idea of a Buhari double, said the plot was based on the desire of the North to hold onto power at all costs.

He continued: “This evil agenda of Jubril was premised on the desire of the Northern to hold onto power at all cost. They know it. Atiku knows it.

“For the records, ex-governor of Jigawa state, Sule Lamido, told his supporters openly at the PDP presidential primaries that he would defeat ‘Buhari’ because he cannot speak Fulfulde. Therefore, he is not and cannot be Buhari.”

The IPOB leader, who vowed to prove to Donald Trump that he never met with the real President Muhammadu Buhari, argued that there are two features within human anatomy that are unique to each individual and can never be cloned.

The first, he said, was the fingerprints while the next was the outer ears.

While Kanu did not speak on the president’s fingerprints, he explained that pre-2017 photographs of President Muhammadu Buhari’s left side outer ear had a deformed lobule and a straight antihelix, adding those unique features can no longer be found in the President’s recent photographs.