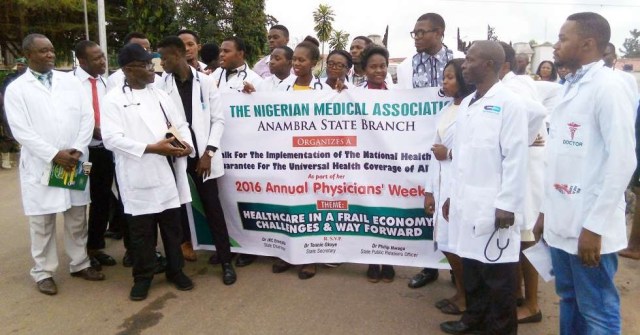 The Nigeria Medical Association (NMA) has attributed poor remuneration and inadequate health facilities as some of the major reasons for mass exodus of medical doctors from the country.

Dr Ekpe Phillips, the FCT Chapter NMA Chairman, said this at the opening of the Annual Health Week of the Association of Resident Doctors (ARD) in Abuja where described the pay package of doctors in Nigeria as poor, stressing the need for government to increase the remuneration of doctors to address the challenge.

He noted that many doctors who left the country to take up foreign appointment did so due to inadequate facilities among other factors. He listed mass unemployment, lack of placement for residency faced by a high proportion of medical professionals in Nigeria as other factors.

Phillips said Nigeria is losing doctors to foreign countries, adding that Nigerian doctors are leaving the country for greener pastures and the workload is becoming too much on the doctors that stay.

“We hear doctors collapsing because the workload is too much because their colleagues have left to find a greener gesture. We have internal and international brain drain; Nigeria now has one doctor catering for 5,000 patients instead of one doctor to 600 patients.

Brain drain is now becoming pandemic and sad news because government did not and still is not doing enough; there is no serious commitment to stemming this syndrome. Nigeria which was one of the richest 50 countries in the early 70s has metro greased to become one of the 25 poorest countries in the World today,’’ he said.

Dr Michael Olarewaju, the President of Association of Residents Doctors, FCT chapter, said that brain drain was a massive problem to Nigeria’s health system. He said that if the problem was not properly tackled in the next two to three years there would not be enough doctors to treat patients in the country. He observed that initially the problem in the sector was strike by health workers “but now they are not going on strike but are exiting the country’’.