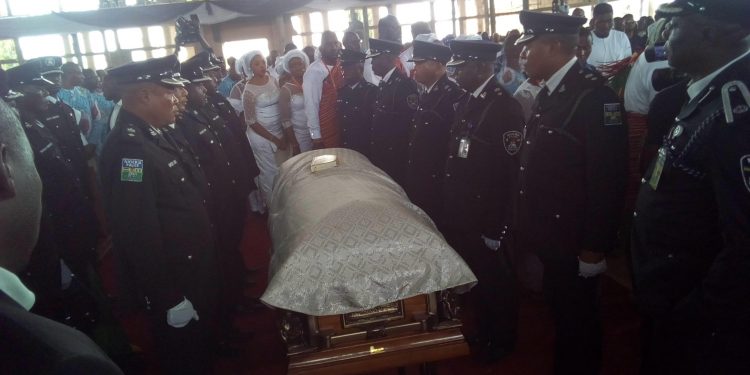 The remains of Chief Anthony Anenih, former minister of Works and Chairman, Board of Trustees (BoT) of the People’s Democratic Party (PDP), was‎ has been laid to rest in his residence at Arue, Uromi after a funeral Mass at the St. Anthony’s Catholic Cathedral, Uromi.

In his homily, the Catholic Bishop of Uromi Diocese, Most Rev. Bishop Donatus Ogun, said that the life of a man is short and defined by God, adding that the day man will return God is uncertain.

He, therefore, urged Nigerians to make out time every day to get closer to God, adding “let us work hard to make the eyes of God see us as His own.”

Bishop Ogun described the late‎ Chief Anenih as good Christian and man of his word, who spoke of his conviction irrespective of political affiliation.

“He was called ‘Mr. Fix it’ not because he could solve all problems, but because he believed any problem can be solved if people are ready to shift ground.

“He was a man of integrity who lived by his words. As a Catholic, consistency was‎ exceptional to him. He was an outstanding politician and mentor, who kept his promises, who believed in giving others opportunity to be,” he said.

Bishop Ogun added that it would be difficult to find a replacement for Chief Anenih in Esan land, saying that anyone who would replace him must start with the generosity of himself. Anenih, he said, was generous with his person, time and resources, adding “he was generous to a fault.”

He warned Nigerians and politicians not to make promises they cannot fulfill ‎because God will demand an account from them.

Speaking on electioneering ahead of 2019 general elections, the cleric urged politicians to campaign on issues.

“Nigerians are tired of hearing rubbish; give us something fresh when we go to bed. If you‎ are hiring a campaign manager, tell us what you want to do to improve our lives,” he said.

Others dignitaries at the event were governors Godwin Obaseki, Ifeanyi Okowa and Dickson Seriake of Edo, Delta and Bayelsa states respectively, ex-governors James Ibori and Emmanuel Uduaghan of Delta State, Alhaji Aliko Dangote and Comrade Adams Oshiomhole, who is the Chairman of the All Progressives Congress (APC).