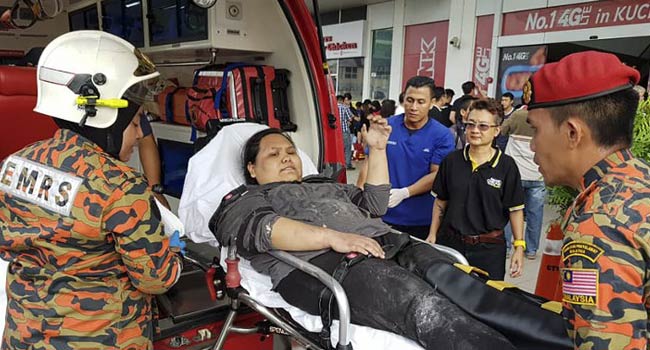 Three people were killed and 24 injured when a powerful explosion rocked a shopping mall in the Malaysian state of Sarawak, on Tuesday.

Officials have however stated the blast was not caused by a bomb but probably by a leaking gas tank.

Wan Abdul Mubin, head of the fire rescue department in the state capital Kuching, told AFP his office received an emergency call at around 0737 GMT.

“We scrambled 39 officers to the scene. We are investigating the cause of the explosion. It is one of the worst tragedies in the state in years. But it is not a bomb,” he said.

“We recovered the bodies of three men. And we have helped in the evacuation of 24 people injured to the nearby public hospital,” he added.

Wan Abdul said the explosion happened near a store on the ground floor of the shopping mall that was undergoing renovation.

A video clip of the aftermath showed the facade of the store torn apart, with some people screaming for help.

“I was purchasing a pizza in front of the shop when suddenly a strong explosion occurred,” George Sting, 39, told the Bernama News Agency.

“The workers in the shop immediately ran out,” he said, adding that some were seriously injured.