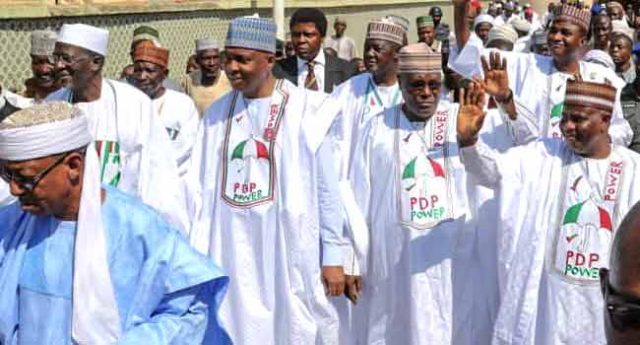 The Peoples Democratic Party (PDP) on Monday said it is on a mission to rescue Nigerians from the All Progressives Congress (APC) led government come 2019.

This is according to the PDP National Chairman, Mr Uche Secondus, who spoke on Monday at the flag off of the party’s presidential campaign in Sokoto State.

“It is important as we are here to let you know that the PDP is on a rescue mission,” Secondus told a large crowd of party supporters at the rally.

The PDP chairman alleged that the Muhammadu Buhari administration has failed the people, stressing that their presidential candidate, Atiku Abubakar, was a better alternative for the people.

In his address, former President Goodluck Jonathan believes the PDP is the only party that can eliminate hunger and ensure that Nigerians have food to eat.

“You have seen how the various presidents and the various parties have worked and one thing that is very clear is that PDP is still the number one party.

“There is something that all of us feel as human beings. Every day, everybody must eat and if you cannot eat well, then you won’t be happy. PDP is the only party that can make sure that all of us eat very well in the morning, afternoon and evening,” he said.

The former president thereafter called on Nigerians to be wise when they go to poll in 2019, saying the coming generations would not forgive them if they vote wrongly.

“Let us not make any mistake. Those of us who are adults old enough to vote; if we vote wrongly, our children and grandchildren will not forgive us,” he said.

Atiku’s running mate and former Anambra State governor, Peter Obi; Director General of the PDP Campaign Council and Senate President, Bukola Saraki; as well as the Speaker of the House of Representatives, Yakubu Dogara, were among party bigwigs at the rally.