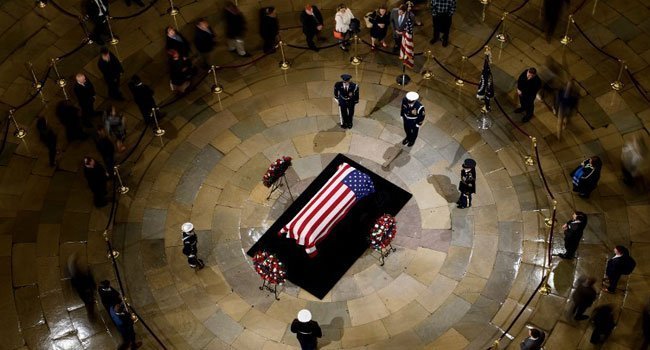 Kosovo has declared Wednesday a national day of mourning for the late US president George H.W. Bush, who was seen as an early ally of the ethnic Albanians in the former Serbian province.

Passionately pro-US, Kosovo flies American flags in front of many government offices and businesses in a sign of gratitude for the US-led NATO intervention that helped severe it from Serbia in 1999.

President Hashim Thaci’s office said in a statement Tuesday that on Wednesday, the day of Bush’s funeral, Kosovo flags will be flown at half-mast across the country in his honour.

It will be a “sign of state and civic respect for (Bush’s) contribution to the freedom of Kosovo”, the statement said.

The statement added that morning classes in Kosovo schools on Wednesday will be dedicated to the US leader.

In the 1990s, Bush’s administration showed an early interest in the plight of ethnic Albanians in Kosovo who were marginalised under Serbian rule.

His government hosted Kosovo Albanians in Washington and in 1992 he warned then-Serbian strongman Slobodan Milosevic that the US would respond militarily if Serb troops started a war in Kosovo.

Less than a decade later war broke out between Serbian troops and ethnic Albanian guerillas.

In 1999, a US-led NATO air campaign forced Serbia to withdraw, ending the conflict and paving the way for Kosovo to declare independence in 2008.

A main street in the capital Pristina is also named after the late Bush’s son and also an ex-president, George W. Bush, whose administration lent key support when Kosovo declared independence.

Bill Clinton, who was US president during the NATO bombing, is also celebrated with his own boulevard and a statue on a Pristina street corner.