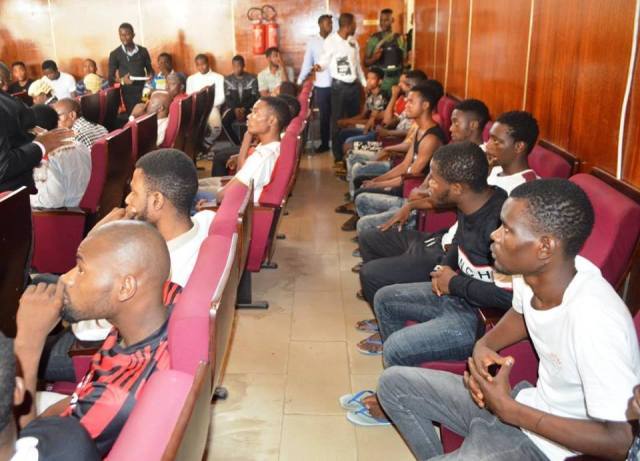 The Economic and Financial Crimes Commission, EFCC, Ibadan Office has arraigned twenty four students of Olabisi Onabanjo University and the National Open University of Nigeria who were arrested for alleged involvement in various cyber crimes.

The defendants were all arraigned on separate charges bordering on obtaining money by false pretences, impersonation and possession of fraudulent documents. They all pleaded not guilty to the charges preferred against them.

One of the counts against one of the accused persons reads: “That you, Rabiu Daniel (a.K.a. Agent Howard Hall) on 23rd June, 2018 at Abeokuta within the jurisdiction of this Honourable Court with intent to defraud, knowingly had in your possession documents containing false pretences to wit: an e-mail address, howardhall900@gmail.com wherein you represented yourself as; Agent Howard Hall, working for the Government/Facebook Compensation Bonus and Poverty Eradication, and other false pretences, thereby committed an offence contrary to Section 6, and punishable under Section 1 (3) of the Advance Fee Fraud and Other Fraud Related Offences Act 2006”.