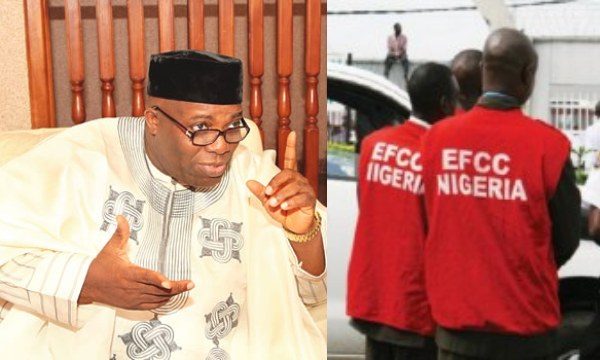 Following his inability to return N120m allegedly received from the Office of the National Security Adviser, the Economic and Financial Crimes Commission has filed 59 charges against a former Senior Special Assistant to the President on Public Affairs, Dr. Doyin Okupe, Punch Metro reports.

It was learnt that Okupe will be arraigned before Justice Ijeoma Ojukwu of the Federal High Court, Maitama.

The charges border on money laundering and criminal diversion of public funds and receiving about N120m when he “ought to have known that the said fund formed part of the proceeds of an unlawful activity of Col. Mohammed Sambo Dasuki (retd.) the then National Security Adviser, and thereby committed an offence contrary to Section 18(a) of the Money Laundering (Prohibition) Act, 2011 (As amended in 2012) and punishable under section 15 (3) of the same Act.”

Okupe, who served under former President Goodluck Jonathan from 2012 to 2015, admitted on social media that he received N10m monthly from a former National Security Adviser, Col. Sambo Dasuki (retd.) based on the instruction of Jonathan.

According to Okupe, the money was meant for a programme on NTA known as ‘Insight’ which showcased the achievements of Jonathan.

In his statement, Okupe said, “The initial N50m was approved by the President to be paid to me from his security vote. N10m was to furnish my rented living apartment and another N10m for my office. The balance N30m was approved as take-off grant.

“The N10m I received from the ONSA monthly was to run my office, pay salaries of staff, including overheads, pay expenses for our numerous press conferences, pay for publications in newspapers, magazines, local and foreign, television programmes, bulletins, and media consultants who assist and facilitate our work. I had about 23 staffers, 11 were graduates out of which five were master’s degree holders.

“The second N50m was approved again by Mr. President when I reported to him that the monthly allowance had been cut from N10m to N5m and that I was no longer in position to keep running a one-hour NTA network programme called ‘Insight’ which was aired 9-10am every Friday.

“We paid for tapes and editing per programme. Besides we also pay honorarium for guests either directly or in form of hotel bills for those outside Abuja, or transportation.

“This cost averagely N500,000 weekly or about N2m monthly. All in all, we spend about N4m monthly on the programme. Mr. President promised to help with the expenses. About a few months later when we had incurred some debts the NSA sent me this N50m which was to cover the cost of the programme for 12 months.”

However, Mr. Sola Atere, who was the Executive Director (News) of the NTA, denied that the station received any money from Okupe.

According to him, the programme was done free of charge as part of the station’s Corporate Social Responsibility.

Atere said initially, the programme, ‘Insight’ was anchored by external persons but later on NTA presenters took over.

He told the EFCC, “Two external persons anchored the programme at the inception but midway, they were not forthcoming. So, NTA presenters were detailed to anchor it. No money was charged for production and transmission of the programme.”