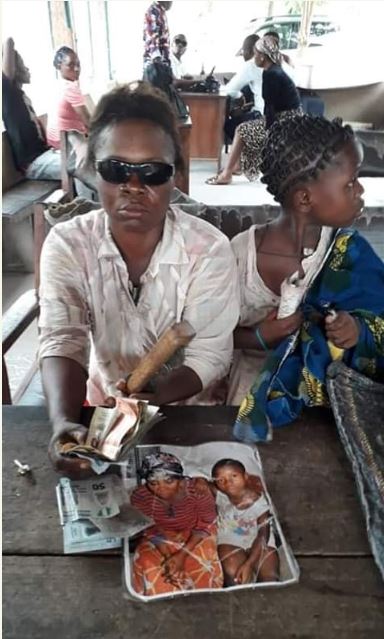 A woman’s cover was blown after she came in contact with an irate policeman who harassed her publicly.

A woman who disguises as a blind person to beg by the roadside with her child in Warri, Delta State, was arrested today after she was reported to the police by a concerned citizen.

According to the president of Nigerian Child Welfare Fund, Joshua Omorere, he had been warning the fake blind beggars who stay at Jakpa junction especially the arrested woman, to desist from deceiving the public with their trade.

Earlier today, he led a team of police officers who raided their spot and arrested the fake blind beggar who was with her daughter as others fled on sighting the security agents.

It was gathered that the police officers were convinced the woman was blind after she and her daughter broke down in tears while being arrested.

On getting to the police station, the officers threatened to put tear gas in her eyes, that was when the woman identified as Ada Nwachukwu admitted she is not blind and disclosed that she came all the way from Orlu in Imo state to Warri just to hustle.

According to report, the beggars make a minimum of five thousand naira daily and as at Mrs. Nwachukwu was arrested she had already made N3,270.