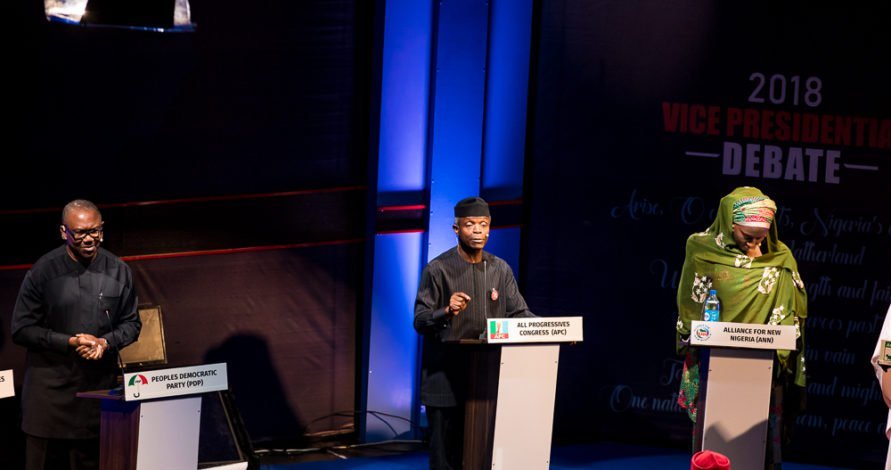 The vice-presidential candidates debate for the 2019 general elections kicked off at the Transcorp Hilton Hotel, Abuja, on Friday, as five candidates slugged it out live on TV.

There were some moments of wrangling in Nigeria’s first TV debate on Friday night among political party candidates ahead of the February 16 presidential election.

And expectedly the feud was between Vice President Yemi Osinbajo and Dr Peter Obi, the vice-presidential candidate of the opposition Peoples Democratic Party.

The first argument arose when Obi derided Buhari administration’s anti-corruption efforts as tantamount to closing the shop and chasing the thieves.

Osinbajo rebutted the analogy and asked Obi, whether anything will be left in the shop if criminals looted all the inventory.

The two speakers also disagreed on whether Nigeria has improved its ambience to attract foreign investment. While Obi reeled out statistics about the volume of foreign investment in other economies, Osinbajo punctured by the fact that the countries Obi cited, such as South Africa and China have one thing in common: adequate infrastructure.

According to Osinbajo, the APC government is investing heavily in this area, in roads and rail transport. He also reminded the audience where Nigeria was in 2015 in the World Bank Ease of Doing Business, rising from 170th position in 2015 to 146th today.

Osinbajo blamed Nigeria’s infrastructural deficit from 1999 to 2015 on the Peoples Democratic Party’s (PDP) administration, which governed Nigeria then and how the Buhari administration in three and half years, despite declining financial resources, has changed the narrative.

READ  I deserve “some accolade” for conducting the freest, fairest election in Nigeria’s history – IBB

Analysts believe that the 2019 Vice Presidential Debate organised by the Nigeria Election Debate Group in collaboration with the Broadcasting Organisation of Nigeria (BON) and Civil Society Organisations. should have been a straight debate between Osinbajo and Obi, as the three other candidates did not offer much in terms of contribution.

Osinbajo and Obi were the stars of the night and as they spoke, they occasionally attracted jeers or cheers from the planted crowd in the audience at the Transcorp Hilton Hotel, in Abuja. The moderator several times warned that certain reactions from the audience were a breach of the rule.

Osinbajo said corruption is the major cause of the country`s current challenges which must be tackled head-on.

He said the country`s economy has consistently in the last six quarters been going up under the All Progressives Congress (APC) led administration, which is focussed on building the country`s infrastructure, especially the road and rail sector.

Obi, the PDP Vice Presidential Candidate said his party’s main agenda is job creation, which he believes remains the key to addressing insecurity and other anti-social vices in the country.

Obi stressed that the country`s main problem is its economy which he said is under the purview of the Vice President, adding that he would do all it takes to set the country`s economy on the right footing if his party is voted into office in 2019.
“The vice president has a role to build the economy and make the country work.Fighting corruption is not a policy,” he said.

Obi further said there was need to review the country`s subsidy regime in the interest of the nation, adding that if the right thing was done, the price of petroleum products would drop. However, he was vague about ‘the right thing that should be done’.

He said the PDP government would properly support Small and Medium Enterprises in the country as well create enabling environment to attract foreign investors.

Osinbajo explained that subsidy of petroleum products is not inherently bad as the United States and other countries have all kinds of subsidies in place. He also said the present government has come up with several programmes to support SMEs, including investing in power at some markets in the country.
“This is not about what we are going to do, but what we are already doing’, he said. Also speaking at the debate, Mrs Umma Getso, Young Progressives Party Vice Presidential Candidate said the girl-child education and women empowerment was her priority.

She stressed that her party had all it takes to move the country to the next level, adding that subsidy in petroleum products was a scam and should be removed completely. She emphasised the need to rebuild the country`s economy which she said is all encompassing, adding that her party would ensure constitutional restructuring and electricity redistribution.

Alliance for New Nigeria Vice Presidential Candidate, Khadijah Abudullahi-Iya said her party if voted into office, would ensure transparency in government`s institutions, diversify the economy and address issues surrounding petroleum subsidy. She also said that her party had in place policies that would address unemployment, and encourage free trade to grow the economy.

READ  THOSE WHO INCITE VIOLENCE IN NIGERIA'S ELECTION MUST FACE THE CONSEQUENCES; US WARNS GOVERNOR NASIR EL-RUFAI

Alhaji Ganiyu Galadima, Allied Congress Party of Nigeria Vice Presidential Candidate said his party would work with technocrats to develop the country`s economy and make her the envy of other nations.

He said his party would privatise all government business to make them more productive.