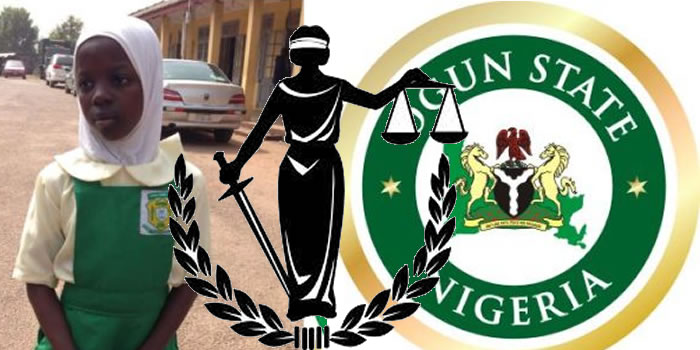 A a 9-yr-old female student has dragged the Ogun govt to court for allegedly violating her fundamental human right to use Hijab, demanding N1m.

The student of Gateway Junior Secondary School, Aisha AbdulAleem dragged the State government and the Principal of her school, Mrs. Kushimo before a High Court sitting in Isabo, Abeokuta.

AbdulAleem, through her father, Mr. Muhammad AbdulAleem, dragged the school principal to the court for alleged forceful removal of her Hijab and denying her access to attend classes in the school. AbdulAleem, in the originating summon filed by her counsel, Olusoji Odutan, seeks the relief of the court to declare as wrongful and unconstitutional the action of the principal to deny her access to education on account of directive of the state government for non-usage of Hijab in public schools in the state.

Odutan said that the refusal of the defendant to allow her client to use her Hijab, violates her rights to “freedom of thought, conscience and religion, freedom from discrimination and right to the dignity of the human persons and right to education”.

The claimant in the suit number AB/5271/2018 also seeks for an order of perpetual injunction restraining the state government and its officers from further infringing on her fundamental human right to use Hijab.

Odutan prayed the court to award the sum of N50,000 against the defendant for serving counter affidavit on him on the day of the hearing of the case, as it will take time for him to study and respond appropriately.

READ  PHOTOS: Tension In Benue University As Students Shut Down Campus Over Loss Of Students’ Leader