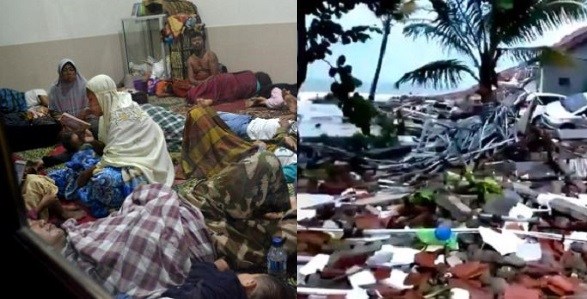 It’s been reported that at least 40 people lost their lives after a tsunami caused by a volcanic eruption hit beaches in Indonesia. The wave hit beaches around the Sunda Strait late on Saturday night, destroying 430 houses, nine hotels and 10 ships.

The country’s Disaster Mitigation Agency confirmed around 600 people have been injured. A further two people are believed to be missing. A tsunami alert was issued and people in low-lying areas fled to higher ground.

Indonesian officials believe the tsunami was caused by an eruption on nearby Krakatoa, which has been spewing volcanic ash into the air. The Australian Bureau of Meteorology has been monitoring the situation and has issued a red warning to airline pilots operating in the region that an ash cloud is spreading south west from the volcano to an altitude of 55,000 feet.

It is believed the tsunami was caused by an undersea landslide following the eruption of the Krakatoa volcano. The wave hit beaches on the Sunda Strait between the islands of Java and Sumatra.

Indonesian authorities said 430 houses have been badly damaged as well as nine hotels. The wave also badly damaged ten ships with dozens others needing repair. In September, at least 832 people were killed by a quake and tsunami that hit the city of Palu on the island of Sulawesi, which is just east of Borneo.