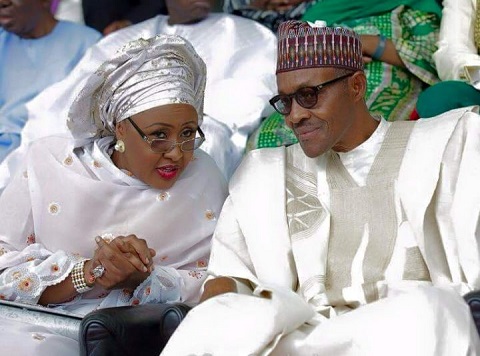 President Buhari has been forced to react to his wife’s allegation of a cabal running things in his government.

President Muhammadu Buhari has said that his wife’s (Aisha) allegation that his government has been hijacked by cabal was false, Vanguard reports.

Buhari went on to ask those alleging that the cabal has taken over his government to come out and say those things they feel was staged managed by the cabal and what the cabal forced him to do should be mentioned.

Buhari recently speaking interview with the Voice of America when asked: “Have you heard of the word cabal? People have been alleging that there are some few people in charge of this administration, that you are not the one in charge. Even your wife said something about this recently, what do you have to say about this?”

Said: “That’s her business… This shows I am a real democrat… What they are saying is different from what is happening. They should come out and say those things they feel was staged managed by the cabal. What the cabal force to me to do. They should mention just one thing.”

Recall that Dr. Aisha Buhari at a conference organized by Project 4+4 in Abuja, some weeks ago lamented that two powerful personalities have constituted themselves as a cog in the wheel of speedy development of the country Buhari.

The President’s wife then said that she was disappointed in men who rather than fight these two men will go to them in the night begging for favour.

Mrs. Buhari, who urged Nigerian women to rise and fight, said: ”I have realized that Senator Babafemi Ojodu, Special Adviser, political, to the President, and Dr. Hajo Sani, and wife of the Vice-President, Mrs Osinbajo, are not comfortable with my saying this and want me to confine myself to my prepared speech but we must say the truth.” The President’s wife insisted that the powerful duo were retrogressive elements preventing the government from moving forward.