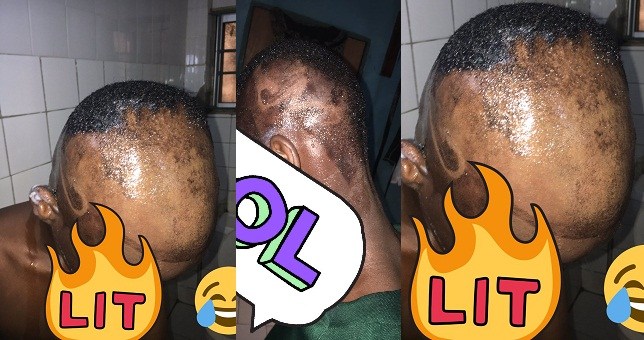 A teenage boy was taught a bitter lesson by his mom who was not having any sign of his irresponsibility, as she quickly dealt him an embarrassing blow.

A Twitter user has taken to the social media to reveal how her mom embarrased her younger brother who had done something the family considered very bad.

The user identified by her handle, @barrister_nofi said that the mom used a blade to shave off the younger brother’s new outrageous haircut.

The Twitter user further disclosed that her brother is just 15-years-old, and he had an ‘adidas logo on one side and Nike on the other side, tinted one side gold and the other side black’.

“To a mirror??It’s not the first time, I would have pleaded with my mum on his behalf buh im tired too and I’m in support of what she did. Normally, she’d punish him or sumn, that didn’t work buh im sure he won’t forget this one African parents are extra buh most of us won’t have home

“Rubbish all these over sabi ,false deep pretenders If you tell me rubbish, I’ll block you A 15 year old, already had a crazy hairstyle, with adidas logo on one side and Nike on the other side, tinted one side gold and the other side black and you’re telling me not to turn his head”

READ  How Jonathan Deported South Africans In 2012, Airlines Forced To Stop Flights To The Country Over Xenophobia