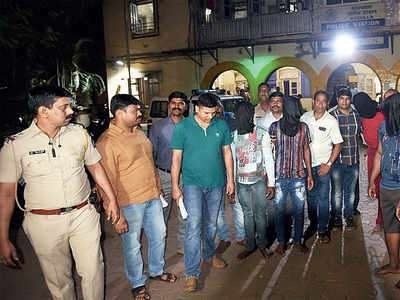 The Byculla police on Sunday, arrested seven more Nigerian drug peddlers who had created a menace in south Mumbai, making it a total of 14 arrested since last week.

Several teams of zone III, had on December 15, arrested seven Nigerians who had fired on cops, injuring four. The police recovered drugs worth Rs 21 lakh, a country made revolver, 550 grams of MD, 110 grams of brown sugar and Rs 41,000 in cash.

Police said they received information that the remaining members of the gang were likely to meet near Byculla railway tracks. A trap was laid and seven more Nigerians were arrested. Police recovered 10 cartridges, seven passports whose visas had expired, 55 grams of cocaine, cash of 200 US Dollars, Rs 3.80 lakhs, a button knife, a digital weighing machines and two mobile phones.

What baffled the police is the fact that the visas were issued to them in Bangladesh.

After their tourist visas expired, the accused were illegally staying in rented rooms in Nallasopara, Vasai Virar and Navi Mumbai.

Police said that the modus operandi of the gang was to move in group of 10 or more and when any police party raids or chase them, they would fire towards police and scare them.