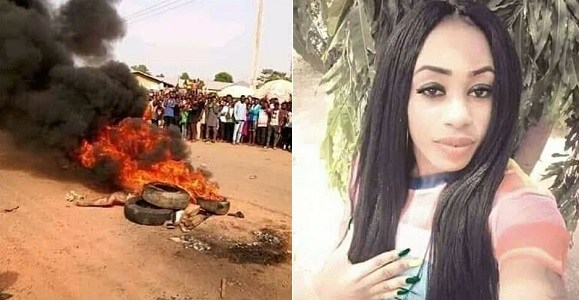 The deceased who has been identified as Miss Vivian, a graduate of Federal College of Education, FCE, Obudu, was also accused of killing an Okada (motorcycle) rider in the area early this month.

Vivian, popularly known as China in Obudu was set on fire on Saturday (yesterday) after reportedly being told by the mob to provide her boyfriend, which she failed to assent to. She was then lynched as passerby looked on.

A Facebook user who goes by the name, Tomclassic Amunde Jnr who also witnessed the act said the Police were on ground but couldn’t save Vivian.

“I was there Live and saw it all. Two well known Police Officers were standing beside me watching the whole scenario. Most of us from the opposing view, our opinion didn’t count because we were so little compared to those who were chanting the burning anthem.

“It took up to an hour before she was lastly burnt,” Amunde said.

“I came out of my house this morning and saw some boys beating up China and asking her of her boyfriend. I identified some of the boys to be cult boys belonging to the KKs. They told the girl to call her friend. She took her phone, tried to reach her friend but it was not successful. So they told her that if her friend does not come out, they will burn her and just like play, they did it.”

“They dragged her and kept beating her from her house till they got to the cyclists park and a big crowd of more than 500 persons gathered and watched her being burned alive.”