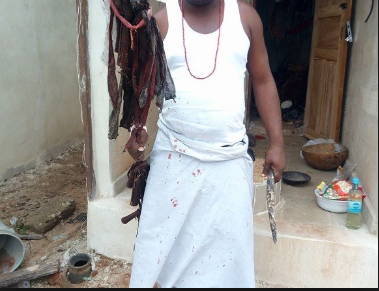 A traditional healer has claimed that he possesses spiritual powers that can restore a woman’s virginity with very little effort on his part.

The native doctor identified as Erdington Virimayi from Kwekwe, Zimbabwe, also claims to be half a prophet and half a traditional doctor, mixing two belief systems which some people regard as incompatible.

The man also claims to have the ability to enlarge men’s manhood to any desired size.

He was quoted as saying, “I restore virginity to girls as long as they follow what I tell them to do. It’s just most men know me for enlarging manhood to the sizes of their choices but I also have a service for women”.

“He (a soldier who had his manhood enlarged) came back to me and thanked me for the service saying girls were falling over him after the service. That is how we do it”.

Virimayi also said that there is nothing wrong with him being both a traditional healer and a “prophet” saying the two belief systems are compatible.