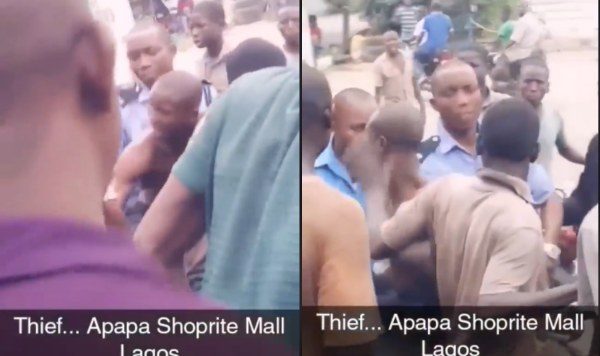 A thief was reportedly caught today at a Shoprite outlet in Apapa, Lagos, but reportedly escaped getting lynched to death by the mob which gathered.

It was also gathered that though the police was present, it did not stop the crowd which gathered from attacking suspect whose cloth was almost removed. Here is a video of the near-lynching the thief caught at Shoprite suffered below;

This is coming few months after it was reported that a Shoprite salesgirl was arrested and arraigned before a Lagos Magistrate Court for allegedly stealing the sum of N553, 956, 000 she realized from sales just one month after she secured employment.

The accused who could not give account of the missing money, was arraigned before an Igbosere Magistrate Court, Lagos on a two-count charge of felony to wit and stealing.

Thief caught at Apapa Shoprite Mall. He was about to get burnt but a policeman rescued him. #SayNoToJungleJustice