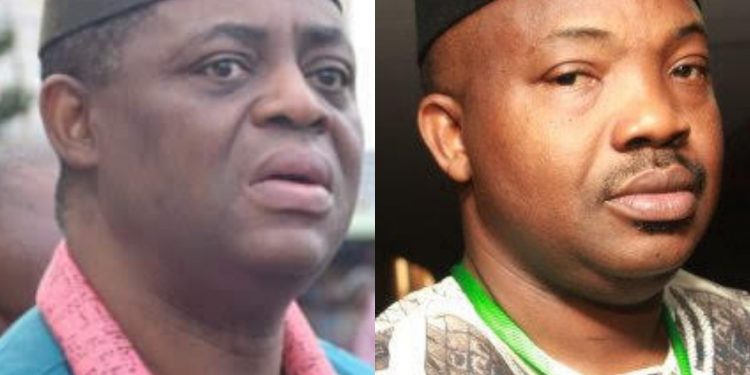 The Abuja division of the Federal High Court has issued a restraining order against the Economic and Financial Crimes Commission (EFCC), the Department of State Services (DSS) and the Nigeria Police from arresting or detaining a former Aviation Minister, Femi Fani-Kayode and Yinka Odumakin.

The preservative order was granted by Justice John Tsoho after listening to a motion exparte which was moved and argued by Mr Chukwuma Machukwu-Ume (SAN) for the applicants.

Following threats by the EFCC to arrest them over their comments regarding the travails of the Chief Justice of Nigeria (CJN), Justice Walter Onnoghen, Fani-Kayode and Odumakin filed a fundemental rights enforcement suit to stopped their arrest.

Spokesman of the EFCC Mr Tony Orilede was alleged to have made the threat to arrest them publicly at a conference where he represented EFCC chairman Ibrahim Magu.

The application was brought pursuant to Section 6 (6)(b) and Section 46 of the 1999 Constitution, as well as Order 4 Rules 3 of the Fundamental Rights Procedure Rules.

It prayed the court to restrain the respondents from arresting and detaining them pending the determination of the application on notice.

Making his submissions, Machukwu-Ume informed the court that the three respondents were plotting the arrest and detention of his clients with respects to their comments over the travails of the Chief Justice of Nigeria, Justice Walter Onnoghen.

The senior lawyer added his clients have gone into hiding as the EFCC, DSS and Police are doing everything possible to arrest them for speaking their minds.

“The EFCC is established to pursue corruption and not comments made by Nigerians expressing themselves,” Machukwu-Ume said.

In his ruling, Justice Tsoho said that he was satisfied that the applicants had made a case that their lives were being threatened.

“I am satisfied that the applicants have made out a case for the court’s intervention.

Meanwhile, the court has adjourned to February 4 for hearing of the substantive suit.