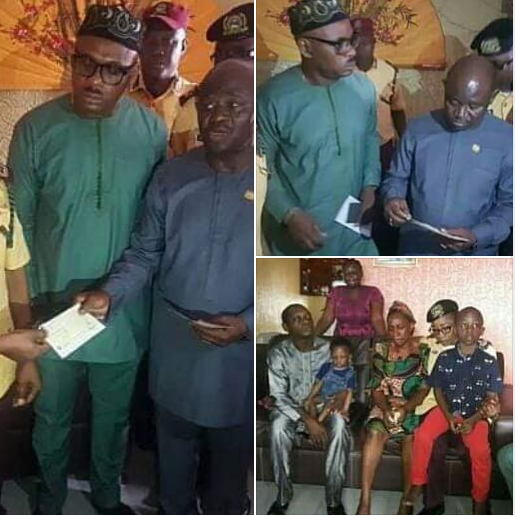 The Lagos state government has fulfilled its promise of compensating the family of late traffic warden with the Lagos State Traffic Management Authority (LASTMA), Adeyemo Rotimi Oke who was murdered in a gruesome manner by a trigger happy policeman, Olukunle Olonade in December, 2018 at Iyana Ipaja while performing lawful duty of traffic management.

Presenting the Ten Million Naira cheque to the deceased’s family on behalf of the state government on Friday at their Ipaja residence, the Permanent Secretary, Lagos state Ministry of Transportation, Dr. Taiwo Salam said in glowing tribute that late Adeyemo was a dedicated, loyal and committed traffic officer and servant of the state government that would not be forgotten for a very long time.

Dr. Salam said Adeyemo’s death on duty was a testimony to his gallantry and commitment to restoring law and order to Lagos roads and in the process he paid the ultimate price. While praying for the repose of his soul, the Permanent Secretary enjoined his family to take his children’s education and future in the front burner of their actions and decisions.

In his comments, the General Manager of the agency, Mr. Olawale Musa described Adeyemo as a hero and someone that laid down his life in the service of God and humanity. Musa said the agency in appreciation of his contribution to freeing Lagos roads of lawlessness, chaos and impunity has instituted a merit award to reward hard working staff.

The award, tagged Bakare -Adeyemo Merit Award was instituted 2 weeks ago to keep his memory and that of Late Siraj Bakare who was killed in similar circumstances, green in the hearts of colleagues. He assured that these gallant officers have not died in vain as their good work will continue to be valued by the agency forever.

He enjoined the family of the deceased to take solace in his good work while noting that he has left his footprint permanently in the sands of time.

The head of the family thanked the state government and governor Akinwumi Ambode for living up to his word and that the family will not forget his swift response and huge compensation to their needs, and that the money will be invested to the benefit and future of his family.

It would be recalled that Adeyemo Rotimi was brutally murdered on duty in December 2018 by an officer of FSARS who was accosted by him for violating traffic rules. The Ten Million Naira was in fulfillment of governor Akinwunmi Ambode’s promise to the family of the deceased.