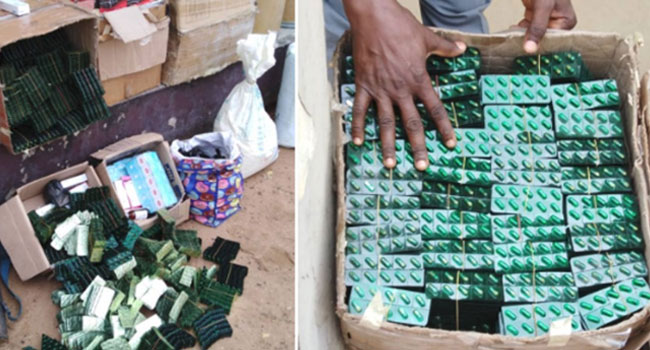 Operatives of the Nigerian Customs Service in Niger State has impounded a trailer carrying tramadol and other substances suspected to be illicit drugs worth about forty-four million naira (N44,000,000).

The trailer carrying the items was intercepted by the service’ special strike force along minna-Suleja-Minna road.

They were concealed under sacks and other items.

Briefing journalists on the seizure and other seizures made, at the Nigerian customs service command headquarters in Minna, the national coordinator of the strike force, Deputy Comptroller of Customs, Abdullahi Kirawa said but for the eagle eye of men and officers in his team, the items would have made their way into the society, pointing out what dangers they could pose to the society.

He said one person has been arrested in connection to the items and that investigation is still ongoing to unravel other culprits.

Mr Kirawa called on members of the public to cooperate with the Nigerian customs service and to be vigilant to report any smuggling activities around them.

The Customs Service strike force coordinator also took members of the press around the warehouse of the showcase other items seized by the team, which include seven hundred and thirty-three bags of foreign rice, eighteen bales of used clothing, vehicles and used tires illegally being smuggled into the country through various routes.

•Sourced from a Channels TV report