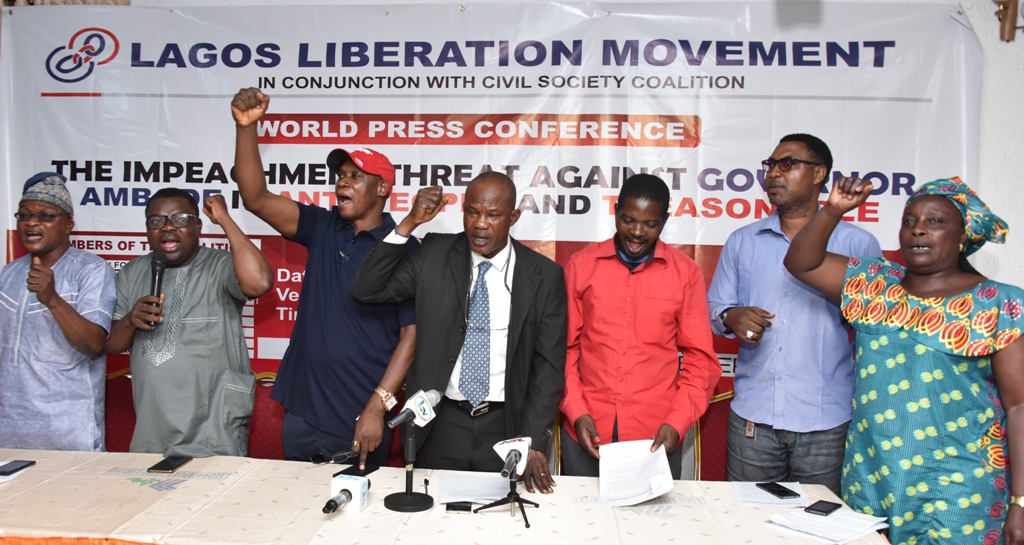 A coalition of civil society groups under the auspices of Lagos Liberation Movement (LLM) on Thursday threatened to occupy and shut down the Lagos State House of Assembly should the lawmakers proceed with the impeachment moves against the State Governor, Mr Akinwunmi Ambode, describing the action as anti-people and treasonable.

The lawmakers had threatened to commence impeachment proceedings against the governor over alleged gross misconduct particularly with regards to the 2019 budget of the state.

But addressing a world press conference at the Airport Hotel in Ikeja, the groups which include Campaign for Democracy (CD), United Action For Democracy (UAD), Centre for Public Accountability (CPA), Democracy Volunteers (DV), Ajegunle Collectives, Lagos People’s Assembly (LPA), Oodua People’s Congress (Reformed), Yoruba Revolutionary Assembly (YORA) and Ohanaeze Youth, Lagos, said with the development, it was obvious that the Lagos Assembly was becoming a political abattoir for the murder of democracy in Nigeria.

LLM Convener, Comrade Mark Adebayo, specifically accused a national leader of All Progressives Congress (APC), Asiwaju Bola Tinubu, as being the architect of the impeachment saga, and urged all Lagosians and genuine compatriots across the country to strongly resist the move by the Lagos lawmakers against the governor.

He said it was obvious that the whole saga was a direct assault by a few political marauders determined to supplant democracy and jeopardise peace and development in the State, and further perpetuate their political dynasty.

According to Adebayo, “It is public knowledge that some days ago, members of the House commenced what is tantamount to a game of shame and senselessness, the results of which are predictably destructive by the ill-advised commencement of impeachment process against Governor Ambode.

“The question that most Lagosians are asking is ‘why?’. However, the reasons are not farfetched: It is fundamentally the handiwork and retrogressive machinations of political forces of evil determined to keep Lagos State in perpetual bondage of a man playing God over more than 20 million Lagosians with a view to perpetuating a political dynasty of lootocratic recklessness, marauding corruption and a relay regime of nepotistic subjugation accentuated by an intractable malaise of primitive accumulation of the most deadly genre, spearheaded, commanded, guided and goaded by Asiwaju Tinubu we daresay.”

He said the coalition and indeed vast majority of Lagosians were convinced beyond reasonable doubts that the allegations against the governor by the lawmakers were unknown to the constitution, but a move basically propelled desperately by few persons to have unrestricted access to the state’s treasury to squander on their political protégés running for public offices in the forthcoming general elections.

While alleging that the current backlash against the governor was over his refusal to comply with directive by his political godfather to release several billions of naira for elections, Adebayo warned Ambode never to contemplate leaving the state littered with uncompleted projects, saying he still had enough time to complete most of them before the expiration of his tenure on May 29, 2019.

He also accused the lawmakers of having nothing to justify the huge sums collected from government for constituency projects, just as he revealed that a comprehensive petition had been put together to anti-graft agencies and multilateral organisations for the Assembly to account for the N800 million being collected as monthly running costs, aside their weekly and monthly allowances.

He also called on President Muhammadu Buhari to prevail on Tinubu not to proceed with the impeachment plan as such would be self-destructive, saying it was important for the APC to sort out its internal conflicts without putting the whole state into crises.

“We like to reiterate that Ambode is the governor of Lagos State and not the governor of the APC. If they have internal issues within their Party that should not be allowed to negatively affect the smooth running of government and make people suffer. The whole state cannot be reduced to the parochial shenanigans of a highly corrupted political family.

“The office of governor of Lagos State is beyond Ambode and as such any further humiliation, disrespect and embarrassment from any quarter will be utterly resisted by the people. Lagosians are unequivocal in their view that Ambode is a performing governor based on his style of governance and project execution, and as such, any further attack on him will be tantamount to attacking the People. And no one can win against the people,” Adebayo said.