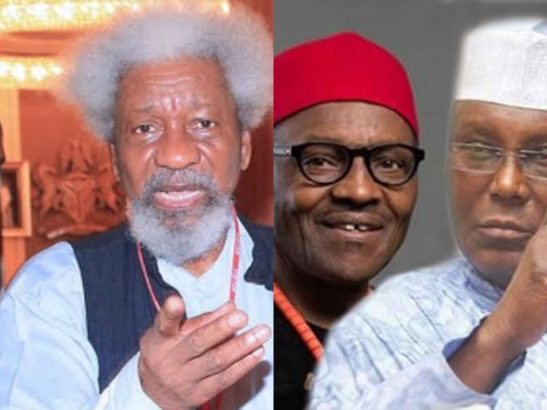 Nobel Laureate and human rights activist, Prof. Wole Soyinka, has said that voting for either President Muhammadu Buhari of the All Progressives Congress (APC) or his counterpart in the main opposition party, the Peoples Democratic Party (PDP), Alhaji Atiku Abubakar in the February 16 presidential election are not options for Nigerians.

The renowned playwright, who expressed concern about the forthcoming elections scheduled to commence on February 16, said the time had come for citizens to chart a new course for Nigeria with their votes. Soyinka, who stated this yesterday, in Lagos, at Citizen Forum 2019, an interactive session on the subject: “Civic Choice in a Time of Judicial ‘Penkelemes,” advocated for what he called ‘creative vote’ as against ‘negative vote’. He urged Nigerians not to be intimidated by campaign rallies and the mammoth crowd that appear to be following these two main political parties.

“For the avoidance of doubt, let me make my position quite clear because I don’t want any ambiguity. I, Wole Soyinka, will not be voting for either the two so-called contesting parties. I find both of them worthy of absolute rejection. “For a number of reasons which I will not go into here, I’m not interested in a comparative assessment. My position is simply that it is time for a totally new direction. And obviously, I’m not the only one, as I’m speaking, there is a coalition having its meeting at the Airport Hotel, Lagos, from which they hope to produce a consensus candidate.

“There is another group meeting in Abuja, also at the end of the day, they also would send us their consensus candidate. Things have been going on quietly in the background to try and change the direction of this nation in a very positive way, and to make the public understand that they do not have to be enslaved permanently to the old, discredited order.

It is my sole business in this election. “I don’t believe in what is called negative vote which means, for me, throwing your vote in a waste basket. I believe instead in a creative vote; not a protest vote, not a negative vote, but a creative vote. And a creative vote means that the will to at least sow a seed through your vote that will germinate eventually. “The pace of germination is beyond the control of everyone, but it is never too early to make a beginning.

It happened before in other societies, when a dark horse emerges from nowhere and prompts all the political juggernauts, caterpillars and so on with their ‘performless’, worthless, their capacity for violence and treachery, when they spew up all kinds of hijackers, those who tried to take over genuine movement, alternative movement, to the extent that we have now, third force here, third force there. Whereas the third force expression was by one of the genuine opposition movements.

“But as usual, the professional and consciousness hijackers have disrupted that particular kind of approach which is one of the reasons why up till now, a consensus candidate has not taken place, simply because these reprobates hijacked the very notion of a third force. “We know the background to it, and all that matters is that an alternative candidate will emerge, and the Citizen Forum will back that alternative candidate,” he said. He explained that the Citizen Forum did not come out in response to any claim that the country is undergoing another Abacha period. “The Citizen Forum actually came into being during the fight against Sani Abacha.

I make the point of mentioning this origin to inform everybody that Citizen Forum hasn’t come out in response to any claim that we are undergoing another Abacha period, as some of you have read in the newspapers. Everybody is entitled to his or her opinion,” he said. Soyinka also condemned the suspension of the Chief Justice of Nigeria (CJN), Justice Walter Onnoghen, by President Buhari. He noted that the Judiciary is the best hope of the common man. Also speaking at the event were Mr. Femi Falana (SAN), human rights activists, Mr. Femi Aborishade, and Dr. Joe-Okei Odumakin.

The trio condemned the suspension of Justice Onnoghen, stressing that President Buhari does not have power to suspend the CJN. Odumakin noted that due process was not followed in the suspension of the CJN and expressed fear that if the rule of law was not obeyed, the governors would, one day, suspend the state chief justices on the ground that it had been done before by the president. In his submission, Mr. Falana said: “What Buhari has done is totally against the constitution of the country. We must proceed to challenge the judiciary for pretending that there was no problem. Nigerians have to be mindful of the dangerous precedent. We must challenge lawyers who are making a mockery of our legal system.” Aborishade called on Nigerians to stop looking up to the two major political parties – APC and PDP, adding that there is need to organize to support the struggle.

“We must stop looking up to APC and PDP. What we ought to do is to organize to support all the struggles of the marginalized groups,” he said. Meanwhile, President Buhari said in Kano yesterday that his decision to seek re-election was informed by his desire and commitment to correct the ills bedevilling the country.

Buhari made the remark at his presidential campaign rally held at the Sani Abacha Stadium, Kofar Mata, in Kano metropolis. “There is nothing that prompted me to seek re-election beside my desire and commitment to correct the ills of the country. “I was a Governor, Minister and Head of State and now a President. So, I need nothing less than to ensure that Nigeria attains greatness,” he said. The president called on all supporters of the All Progressives Congress (APC) to vote massively for the party to ensure its victory at the polls. “There is nothing new I will tell you, but I am here to thank you for taking the pains to wait patiently to see me,” he said. On his part, Atiku has vowed to restructure Nigeria for better if elected.

He made the vow during a presidential rally held at the Holy Trinity open field, Onitsha, Anambra State yesterday. Addressing party faithful, the former Vice President said his administration would complete the 2nd Niger Bridge as well as all the road projects in the South-East. According to him, if elected into office on February 16, the dream of restructuring will be achieved. Atiku said that his administration would resuscitate all sectors of the economy by making policies that would make every citizen comfortable. The PDP presidential candidate also pledged to resuscitate the three seaports in Delta, if elected. He made the pledge in his address to the people of Delta during the PDP presidential rally yesterday at the Stephen Keshi Stadium in Asaba. He said: “First and foremost, I will ensure the resuscitation of the three seaports in Delta that have been left dead over the years. “Second, I will complete all abandoned Federal Government projects in the state. “Third, my administration will ensure urgent completion of the second Niger Bridge that the present government is playing with.”