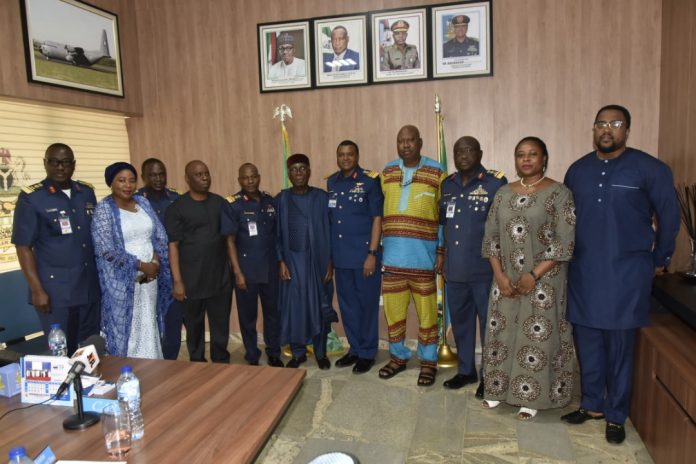 The Federal Ministry of Agriculture and Rural Development is poised to partner with the Nigerian Air Force (NAF) to empower the families of NAF personnel in the various Bases through the provision of equipment for the enhancement of agriculture. This was made known today, 1 February 2019, when the Honourable Minister of Agriculture and Rural Development, Chief Audu Ogbe, paid a courtesy call on the Chief of the Air Staff (CAS), Air Marshal Sadique Abubakar, at his Office in Headquarters (HQ) NAF Abuja.

In his remarks, Chief Ogbe stated that the Ministry intends to distribute equipment in formations and Units to engage the wives of NAF personnel, through the NAF Officers’ Wives Association (NAFOWA), in activities such as rice milling, cassava processing, fruits and vegetables produce as well as the production of milk, in the near future. “I am happy to inform you that we have a new arrangement with the Government of Brazil, Islamic Bank and the European Development Bank for the project of agro-development in every State of the Federation and all the locations where the Armed forces are operating”, the Minister said. He added that the Ministry has been able to secure a loan of $1.2 billion, part of which would be used to procure 10,000 tractors; some of which would be made available to the NAF for ploughing and preparation of land. According to the Minister, other items to be procured include harvesters, soil testing equipment and irrigation facilities.

Chief Ogbe also noted that machinery for the processing of agricultural produce would also be acquired. “It is not enough for us to be self-sufficient in raw material production, but it is time we add value not only for local consumption, but for export”, he remarked. He said the Ministry was giving high priority to the scheme as part of its contribution to enhancing the economic well-being and self-sufficiency of Service personnel and their families because of the risks associated with the military profession, which could lead to sudden changes in their family situations. He said the objective was to empower the families of the men and women working hard to secure the nation, which, in turn, would holistically help in securing the nation. Chief Ogbe ended his remarks by expressing his profound appreciation to the CAS and all members of the NAF for their invaluable contributions to ensuring the security of the nation.

The CAS, in his response, congratulated the Honourable Minister for the giant strides recorded in the Agricultural Sector of the Country within the past 3 years. He thanked him for his commitment to empowering the families of personnel which, he said, would key into NAF’s already existing framework for the enhancement agriculture in the country through the Barrack Youth Empowerment Through Agriculture (BYETA), which was established in NAF Bases across the country to encourage agricultural entrepreneurship among women and youths. The scheme, he said, had boosted the income of families of personnel and the youths, most of whom have glowing testimonials of how the programme has helped them to become positively and gainfully engaged. He expressed delight that the Ministry’s scheme would give BYETA a further boost that would greatly benefit NAF personnel and their families.

Air Marshal Abubakar informed the Honourable Minister that the NAF has continued to build its capacity for both force projection and force protection. He said the Service has effectively and efficiently projected Air Power in the various Theatres of Operation in the Northeast, Northwest and Northcentral parts of the Country whilst also projecting force beyond the shores of the country in the Gambia and Sierra Leone. He observed that the NAF has also deployed Regiment and Special Forces personnel who are working side by side with personnel of other Services in Zamfara and Benue States under Operations SHARAN DAJI and WHIRL STROKE. The CAS said, furthermore, that in order to enhance response capabilities in dealing with internal security threats along the Benue-Nasarawa corridor, the NAF had activated the 21 Quick Response Wing (21 QRW) Agatu, leading to a return of relative peace in the area. He said the NAF also conducted a Medical Outreach in Agatu from 3 – 8 January 2019 that provided free medical services to nearly 4,000 members of the Community. He said in that way the NAF, whilst ensuring security, had also promoted their health and allowed for the enhancement of agriculture in the area.