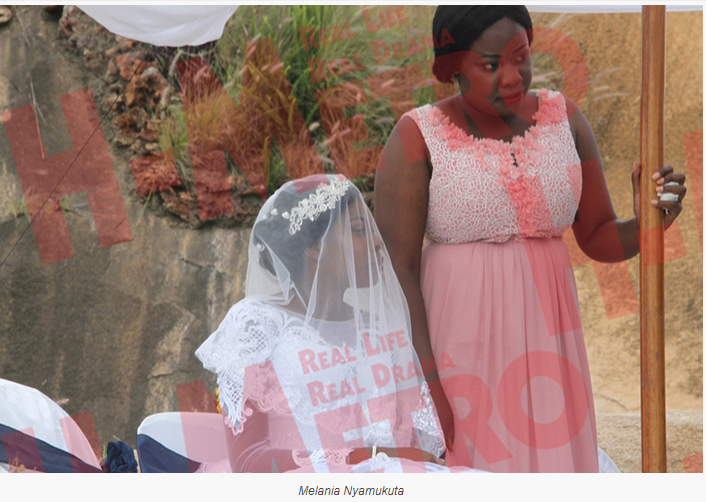 Pictures have emerged showing the moment commotion broke out at a wedding ceremony over the weekend after relatives of the groom’s first wife invaded the venue and demanded a stop to the wedding.

The relatives claimed that Obey Jekenya of Mabvuku in Zimbabwe was still legally married to Lisa Kanhimba and as such could not get married to Melania Nyamukuta.

H-Metro reports that Lisa’s relatives who had planted themselves around the venue caused a commotion when the couple was about to take their vows shouting that they had a court order from the High Court to stop the wedding.

Lisa’s mother even went as far as rushing to the pulpit to manhandle her former son-in-law. In the process, she grabbed him by his collar and tore off his bow tie.

She was heard shouting, ‘Pano hapasi kuzochatwa kana asati aramba mwana wangu’, (‘There will be no wedding ceremony here today because he has not yet divorced my daughter’)

Lisa’a aunt also approached the pulpit with the couple’s two children to prove that he had another marriage.

Due to the interdict, the wedding could not take place and the new bride, Melania broke in tears as she watched the drama unfolding at what was supposed to be the best moment of her life.