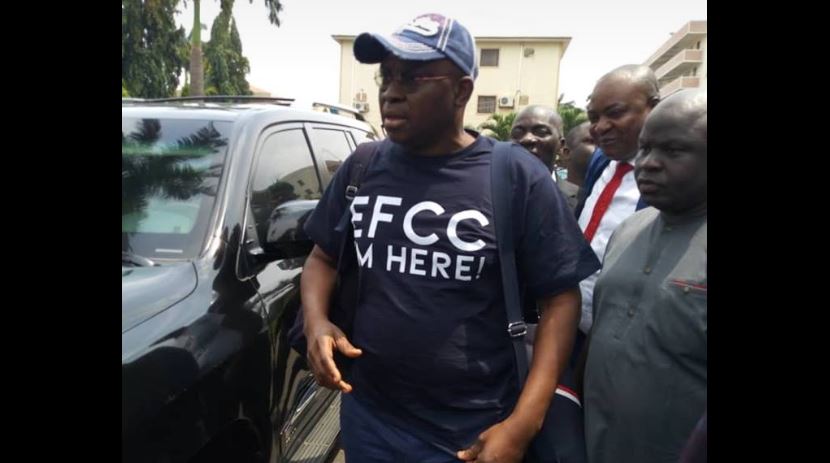 A Federal High Court in Lagos on Wednesday fixed Feb. 7 for continuation of trial of the immediate past Governor of Ekiti, Mr Ayodele Fayose, over alleged N6.9 billion fraud.

The case which was earlier fixed for today for continuation of cross examination of the fifth prosecution witness, has been shifted to Thursday.

On the next adjourned date, both the prosecutor, Mr Rotimi Jacobs (SAN), and the defence counsel, Mr Olalekan Ojo (SAN), will address the court on the admissibility of an extra judicial statement made by a party who is not standing trial.

Fayose was arraigned by the Economic and Financial Crimes Commission (EFCC) in Oct. 22, 2018 alongside a company Spotless Investment Ltd on 11 counts.

MORE READING! Ooni of Ife thanks God for Osinbajo’s safety after helicopter mishap
He had pleaded not guilty to the charges and the court had granted him bail in the sum of N50 million with one surety in like sum.

EFCC had opened case for the prosecution on Nov. 19, 2018 and called four witnesses.

On Jan. 21, the prosecution called its fifth witness, Sen. Musliu Obanikoro, a former Minister of State for Defence.

At the last adjourned date on Feb. 5 (Tuesday), Obanikoro was still under cross examination by second defence counsel Ojo, who was expected to continue on the next date.

According to the charge, on June 17, 2014, Fayose and Agbele were said to have taken possession of the sum of N1.2 billion, for purposes of funding his gubernatorial election campaign in Ekiti, which sum they reasonably ought to have known formed part of crime proceeds.

MORE READING! #RetrieveEbube: Activists rescue girl, 14, from forced marriage to 66-year-old man
Fayose was alleged to have received a cash payment of the sum of five million dollars, (about N1.8 billion) from Obanikoro, without going through any financial institution and which sum exceeded the amount allowed by law.

READ  Dino Melaye: Ozekhome reveals what Buhari is trying to do

He was also alleged to have retained N300 million in his Zenith Bank account and took control of the aggregate sums of about N622 million which sum he ought to have known formed part of crime proceeds.

Fayose was alleged to have procured De Privateer Ltd and Still Earth Ltd, to retain in their Zenith and FCMB accounts, the aggregate sums of N851 million which they reasonably ought to have known formed part of crime proceeds.

MORE READING! I don’t love my husband again, wife tells court
Besides, the accused was alleged to have used the aggregate sum of about N1.6 billion to acquire properties in Lagos and Abuja, which sums he reasonably ought to have known formed part of crime proceeds.

The accused was also alleged to have used the sum of N200 million, to acquire a property in Abuja, in the name of his elder sister, Moji Oladeji, which sum he ought to know also forms crime proceeds.