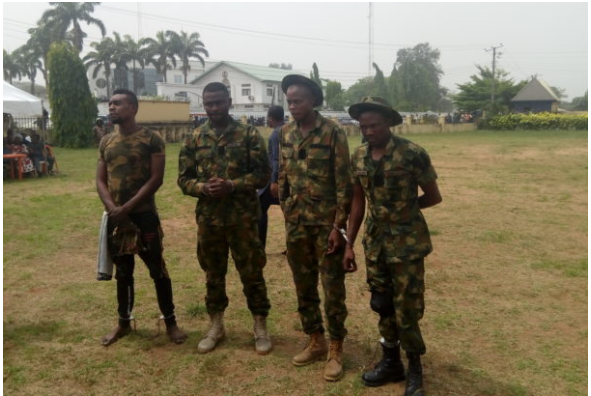 Five Army officers suspected to be fake soldiers, Tuesday were paraded at the Imo state police command headquarters in Owerri.

The Commander 34 Artillery Brigade, Obinze Owerri, Brigade General H. I. Bature, stated this during the signing of the peace Accord/Agreement by the Imo state governorship candidates ahead of the 2019 general elections.

He also said that two out of the five suspects were caught escorting a politician, but the Army commander did not mention the name of the politician said to be enjoying the security of the fake Army officers.

On the arrest of the suspected fake Army officers whose names were not mentioned, at the parade ground, the Army Commander said: “You can see, they are wearing the same uniform. You will find it difficult to differentiate them from myself. They are not soldiers. Unfortunately, two of them were caught escorting a politician. “One of them, Kelvin, is not near anywhere close to military formation. We have a way of identifying fake soldiers. The exhibits recovered is unbelievable. I want to sensitize our people that if you are in the habit of recruiting fake Army we will arrest you.”