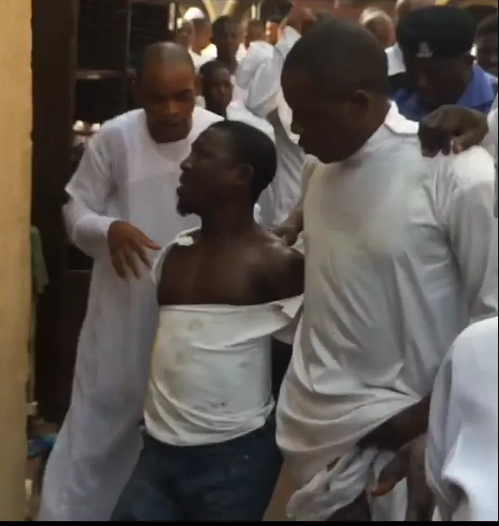 A suspected kidnapper was nabbed while attempting to abduct children in a church in Lagos few days ago. The kidnap attempt was foiled by vigilant worshipers.

It was gathered that three men had disguised as worshippers and sneaked into the popular Celestial Church of Christ, Wonderland Parish, at Alaguntan along New Ipaja Road, in Iyana Ipaja area of Lagos with a plan to kidnap some children.

Their plan was however aborted by the mother of one of the children they had targeted who raised the alarm after noticing one of them trying to sneak out of the church auditorium with her baby.

One member of the gang was subsequently arrested by the worshippers while the remaining two escaped.

The suspect who had not been identified was beaten up by angry worshippers before he was handed over to the police.

One out of three Kidnappers apprehended by security men while trying to kidnap 3 children at CCC Wonderland Parish Alimosho, Lagos State, but unfortunately the two others escaped.

Posted by Africangossips on Tuesday, February 12, 2019