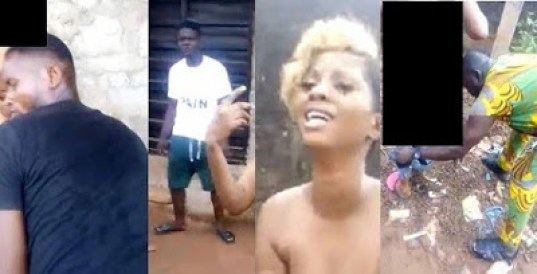 The accused are the head of vigilance group in Ugbiyoko community, Mr. Lucky Igbinovia aka One Man Squad, Iyamu Kingsley and Mr. Joel Otoghile, who is the prime suspect and resides in Ghana.

The accused were arraigned on a 14-count charge bordering on kidnapping, attempted murder, unlawful administration of noxious substance into the private parts of Ada and “unlawful trial by ordeal” over allegation of phone theft.

Ugwumba told the court that investigations showed that no phone was missing and that it was conceived to extort money from the victim.

He said: “A native doctor, magically inserted two live bullets into the body of Ada, saying she would die if she refused to confess.”

Acha remanded the suspects in prison and adjourned the case till March 6, 2019. He ordered the prosecution to produce other suspects at large in court, especially the native doctor, who fingered Ada as the person who stole Otoghile’s phone.

The victim was said to have been threatened with bullets and life snake to force her to confess, when she maintained her innocence, she was stripped and pepper inserted into her private parts.

The accused were presented to journalists yesterday before being arraigned and remanded in prison.

Trouble started for Ada after Otoghile, who had just returned from Ghana with his wife, lodged at Lafun Hotel located at Ugbiyoko community in Egor Local Government Area of the state and later “organised ladies for his cousins”. One of the ladies was Ada.

Ada and other ladies were leaving when Otoghile discovered that his iPhone, worth about N44,000, was missing. The native doctor, through some magic fingered Ada as the culprit and within minutes, had stripped her and the ordeal commenced.

While she was being assaulted, one of the accusers was busy video recording the incident. The video was later uploaded on social media, attracting public outrage.

The Acting Inspector-General of Police (IG), Mr. Mohammed Adamu, yesterday frowned at the rising spate of impunity in the country, warning that his administration would not tolerate human rights’ violation under whatever guise. Specifically, the IG condemned the case of a 45-year-old woman, Odugu Blessing Dada, from Delta State, who was allegedly assaulted. He also mentioned the case of Ada.

To underscore the seriousness the police chief attached to the criminal case, the Edo State Commissioner of Police, Mr. Hakeem Odumosu, has been directed to ensure that perpetrators of the heinous act were brought to deserved justice.