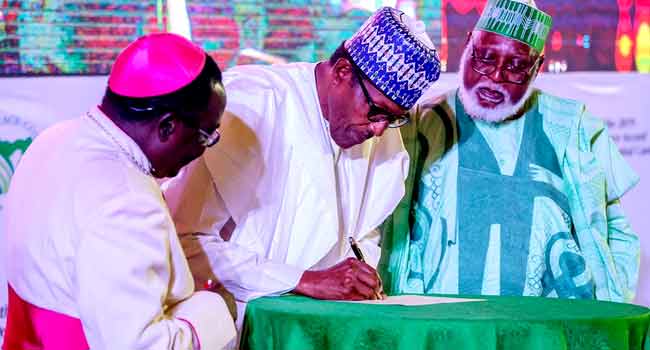 President Muhammadu Buhari has called on Nigerians not to forget that the nation’s unity is more important than any other thing, even as they prepare for the coming general elections.

He made the call on Wednesday at the final signing of the peace accord at the International Conference Centre in Abuja.

The President stressed that violence should not be allowed to have a place before, during, and after the polls while the youths must shun acts that can lead to the breakdown of law and order.

“I am making a special appeal to our young people: Do not allow yourselves to be used to cause violence,” he told the audience at the event. “Please eschew all forms of violence and cooperate with all the relevant agencies during these elections.”

President Buhari added, “We will vote according to parties, but in the end, the only real party is Nigeria, our country.

“Our elections are important only to the extent that they make her strong. Let us do our best and ask God to bless us and our country.”

With less than three days to the elections, the President noted that there was anxiety in the air, saying it was typical of any form of competition and contest no matter the level of preparation.

According to him, the forthcoming elections are very special and significant for the growth of the nation’s democracy.

President Buhari informed the gathering that there had been a lot of fears and anxieties from within and outside Nigeria about the future of the country.

READ  Who are the four candidates standing in Ivory Coast's presidential election?

He described the situation as an evidence that Nigerians were getting matured in their disposition towards electoral outcomes.

The President stated that while over 70 political parties fielded presidential candidates although some candidates have withdrawn, there was no doubt that the nation was moving forward with its democracy expanding and deepening.

“I call on all Nigerians to contribute to the building of a viable polity by more active participation well beyond the mere casting of votes,” he urged.

“Elections by themselves do not constitute Democracy. It is the spirit of citizenship engagement that utilizes the energy of citizens towards the attainment of good governance.”

On the incidents in which people lost their lives during campaign rallies, President Buhari prayed that God grants them eternal peace.

He, thereafter, said now that campaigns were winding up, the next assignment for Nigerians was to go out and exercise their civic duties.

The President appealed to his fellow contestants to commit to the ideals of a poll free of violence, so as to keep the country and its people safe.

He informed them that the Independent National Electoral Commission (INEC) had already assured the people that they have done everything possible to ensure free and fair elections.

President Buhari also said the security agencies have been fully briefed that their visible neutrality was key to the conduct, credibility and success of the polls.

The thanked the Secretary General of the Commonwealth, Patricia Scotland, the National Peace Committee (NPC) led by General Abdulsalami Abubakar (rtd), and other stakeholders for their efforts towards conducting peaceful and credible polls.

READ  U.S President Joe Biden: Trump Should Not Get Intelligence Briefings Due To His ‘Erratic Behaviour’