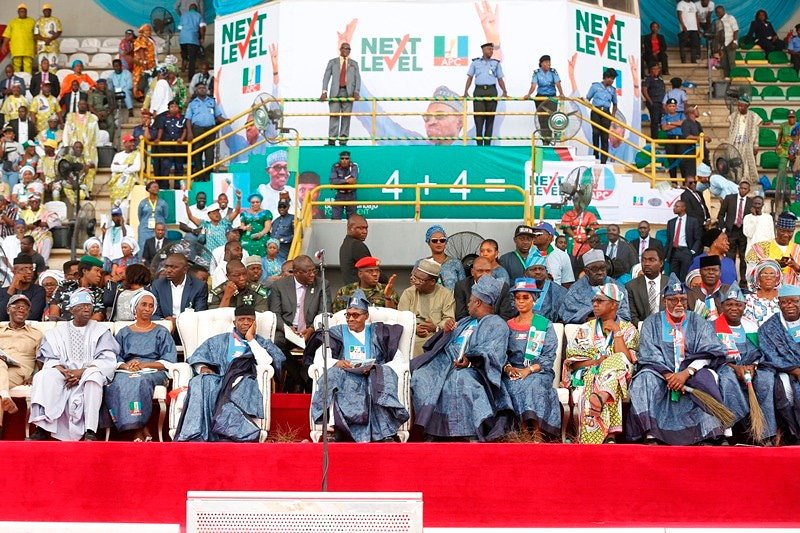 Ogun State Governor, Ibikunle Amosun, has denied allegations the All Progressives Congress (APC) that he sponsored thugs to the presidential rally of the party in the state.

He faulted the claims in a statement by his Special Adviser on Information and Strategy, Mr Rotimi Durojaiye, and obtained by Channels Television on Wednesday.

Amosun said it was ridiculous that a party would accuse a governor of sponsoring thugs to the rally organised and hosted by him in his state.

The reactions followed the APC presidential campaign which held on Monday in Abeokuta where the party’s National Chairman, Mr Adams Oshiomhole, was booed and stoned by some angry people at the gathering.

A day after the incident, APC National Publicity Secretary, Mr Lanre Issa-Onilu, issued a statement in which the party threatened to take punitive measures against Governor Amosun.

Responding to the threat, Amosun’s aided, “The position of the governor is that rather than dissipate their energy on those they will deal with after election, Comrade Oshiomole and his co-travellers should be remorseful that their anti-democratic conduct has denied the APC scores of legislative seats and a number of executive positions across the country even before the elections.

“They do not need to wait until after the election, they should throw in the towel now for undermining the chances of the party they have cornered for their selfish ends,” he added.

Commenting on the allegation that the governor sponsored thugs to the presidential rally, Durojaye said it was clearly ridiculous that someone would author such a statement.

READ  What I’ll do to Fayose – Senator Ojudu

He noted that as the governor of the state, Amosun was not only the host at the rally but he organised the grand reception for President Muhammadu Buhari.

“The relationship between President Buhari and Governor Amosun is well known,” Durojaye stated. “It is, therefore, unthinkable that someone will allege that Governor Amosun will organise thugs against the President.”

Amosun’s aide, however, claimed that issuing the statement was a confirmation of “the personification of the APC by Comrade Oshimhole who is using the party to ventilate his personal grouse against Governor Amosun.”

He also accused the national chairman of the party of meting out injustice to a majority of APC supporters in Ogun, stressing that such would not stand.

“Mr President was given an unprecedented rousing welcome into the Moshood Abiola Stadium on arrival and the atmosphere at the rally remained peaceful and carnival-like until former Governor of Osun State, Rauf Aregbesola and Comrade Oshiomhole incensed the crowd with their unguarded speeches,” Durojaye alleged.

He said, “It is important to note that contrary to the erroneous impression being created that President Buhari campaign tour ended abruptly, President Buhari attended all campaign activities as scheduled after the rally at the stadium.”

The governor’s aide disclosed that the President met the Ogun State Council of Traditional Rulers at the June 12 Cultural Centre where he addressed 1,012 traditional rulers and chiefs.

He added that President Buhari had a private lunch at the Presidential Lodge before departing Ogun State as scheduled.