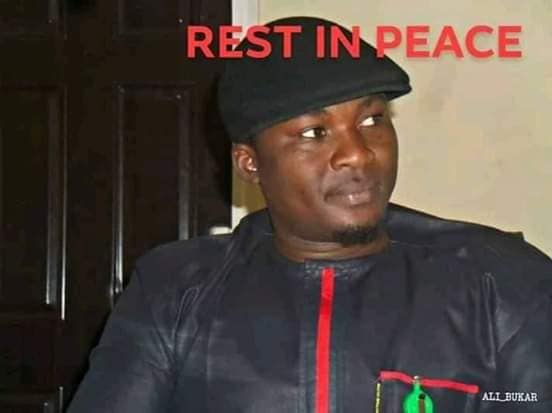 Pictured is one of the victims killed after Boko Haram insurgents opened fire on the convoy of Kashim Shettima, governor of Borno state, on Tuesday.

About three persons, including an aide of the governor identified as Usman Bagidos were killed in the process.

Security sources told TheCable that the incident happened while the governor and his campaign team were on their way to Gamboru Ngala.

Shettima, a two-term governor, is contesting Saturday’s senatorial election under the platform of the All Progressives Congress (APC). The governor confirmed the attack to TheCable, saying a soldier was among the three persons killed.

“We were ambushed last night at Maula village, on our way to Gamboru-Ngala and we lost three lives: a soldier and two stakeholders,one of whom is the influential chairman of Jogol Handset Sellers Association,” he told TheCable via text message.

The governor’s media team later issued a statement which gave details of the unfortunate incident.

“Six vehicles in Governor Kashim Shettima’s convoy were on Tuesday evening ambushed by Boko Haram fighters along the road to a border town of Gamboru, headquarters of Ngala local government area of Borno State. Three persons died while a soldier sustained injuries,” the statement read

“Other persons fled and escaped unhurt. The insurgents carted away the six vehicles they attacked. The vehicles were the last part of the Governor’s convoy on their way to a political rally.

“Governor had passed before the insurgents who took advantage of the dust from desert area to launch attack. Information about the attack wasn’t confirmed until late night as those behind were thought to have also joined the rally since the convoy drove into the rally.

“The Governor passed the night in Gamboru after the rally. Gamboru was one of the areas occupied by Boko Haram before it was liberated by tough multinational forces from Chad.

“The Governor had departed Maiduguri on Tuesday morning, stopped over in Mafa and Dikwa local government areas for campaign rallies.

“On his way back on Wednesday, he stopped in Dikwa to meet with military commands over the attack. He returned to Maiduguri past 7pm on Wednesday.”