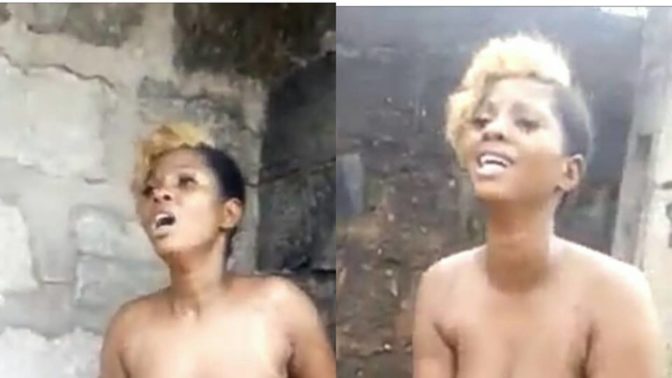 Twenty-four-year-old Miss Favour Friday has finally decided to open up on how she was caught in the web of the men who pinned her down and inserted pepper into her private parts.

Favour, who is from Rivers State, said she had been living in Benin since 2018. She disclosed that February 1, was a day she would never forget; that was the day the men accused her of stealing and thereafter debased her.

Favour was beaten and stripped by some men who accused her of stealing iPhone X Max valued at N440,000. Her accusers later inserted pepper into her private parts after taking her to a native doctor, who carried out a voodoo activity even in the face of repeated denial.

Three persons, the head of the vigilance group at Ugbiyoko community, Mr. Lucky Igbinovia popularly known as One Man Squad, Joel Otoghile and Iyamu Kingsley, have been remanded in prison custody in connection with the incident.

Recalling that fateful day, Favour said: “I was in the hotel, where other girls and I used to ‘hustle,’ when a guy called my friend. He asked her to come to Lafun Hotel, where he was staying with some of his friends.”

After receiving the phone call, Favour’s friend asked her if she could go with her, she responded in the affirmative.

Favour recalled: “My friend and I dressed and headed for the hotel. When we got there, the guy that called my girlfriend said I should go and stay with another guy that needed a girl. I sat in the middle of the men; the other man was with my friend. One of the men was breaking Tramadol and mixing it inside a bottle of Coca Cola. My girlfriend said she didn’t understand what the man was mixing inside the bottle. She was afraid and said she wanted to leave.

“My friend went to the man that she was with, and asked him why he was taking Tramadol. She said she didn’t want to take it and wanted to leave. The man asked her how she knew the stuff was Tramadol. She replied that her friend told her what it was. The man started arguing about the mixture; I picked up the label of the substance to prove to him that it was Tramadol he was taking.

“He accepted but argued that the drug doesn’t make someone to feel high. My girlfriend said she could no longer stay that she wanted to leave. She asked the man that called her, to give her transport fare. The man gave her N500.”

Favour said that as soon as her girlfriend left, she followed. She said she didn’t want to stay there alone, especially since the person that brought her had left.

She said: “It was not up to 30 minutes after we returned to our hotel, that some men came shouting that I should return the phone I took. I asked what phone? I told them I didn’t take any phone. At that point, one of them slapped me. They wanted to strip me there, but our director warned them not to try it.”

According to Favour, as the argument raged back and forth, dusk began to gather. Tired of the accusation and counter-accusation, the director asked the men to leave and return the next day.

Favour said: “They came the next day. They took us to, One Man Squad’s house. The man asked what happened, we explained. He said he would take us to a native doctor’s house. He called the native doctor and asked him to come. Our director then said he was going to the bank to withdraw money to give his wife. Immediately the native doctor came, the men started speaking to him in Bini language.

“The native doctor said we should write our names on a piece of paper. We were about six persons that wrote our names. He said that the name of the person who stole the phone would disappear, while the names of those innocent would remain.

“The man who said his phone was stolen was asked to crosscheck the names and keep the paper. After the first time, I didn’t see my name; I was asked to write down my name. The man did what he did and again, I didn’t see my name. The native doctor said they should hold me; that I was the person who stole the phone. The native doctor also took two bullets and placed them on my stomach; right before my eyes, the bullets disappeared.

“He said that I should confess that I stole the phone, but I told him I didn’t. He said that since I have refused to confess, that the bullets would burst inside my stomach and kill me. He left, followed by the men that brought us there. A few minutes later, the men returned and asked me to go and beg the native doctor or I would die. I still maintained that I didn’t take the phone. Tired, I grudgingly went to beg him, but suddenly he brought out a snake and out of fear, I lied that I took the phone, but didn’t know where I kept it.”

Favour said that after the native doctor left, the men started beating her. They stripped and inserted pepper into her private parts, while one of them video-recorded it.

“One woman later came to rescue me. She took me to a corner. She asked me if stole the phone, I said no. She suggested that I should pay them; the men welcomed the idea. They said I must pay N440,000, which they claimed was the value of the phone,” recounted Favour.

By then, news has travelled to Favour’s friends. When the ladies heard about the N440,000 demand, they rallied and contributed N250,000.

It was learnt that the men, who went to the base of the ladies, started a reign of terror. They destroyed things, including louvers and furniture. Although the director gave them money so that they would leave, they vowed to return the following day to collect a balance of N180,000.

“On Sunday the men sent the video to my friend’s phone. She asked them why they sent the video even after they had collected money,” narrated Favour.

It was later discovered that the video had been uploaded on the internet.