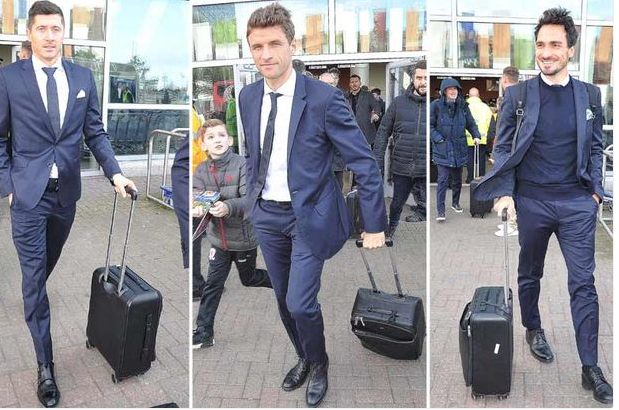 Bayern Munich have touched down in Liverpool as they prepare for their huge Champions League last-16 tie at Anfield tomorrow night.

The German giants will train at Anfield later today as they get set for the first of what Manuel Neuer believes will be “two finals” in a bid to reach the quarter-finals.

They have a few injury problems ahead of the game, with Arjen Robben and Corentin Tolisso not travelling to England due to injury.

Experience defender Jerome Boateng has also been left behind due to illness, along with the suspended Thomas Muller and Franck Ribery, who became a father over the weekend.

The Bundesliga leaders have had an underwhelming season so far by their own high standards but are aiming to go all the way in the Champions Leauge.

Their clash marks a chance to take on Jurgen Klopp once again after several memorable battles when he managed Borussia Dortmund.

Goalkeeper Neuer reckons the familiarity between the two parties will make for an exciting spectacle – and he revealed they have a plan to thwart Liverpool’s counter-attacking threat.

“It will be two great games,” Neuer told ESPN FC ahead of his first ever game at Anfield.

“For us, it’s very important to play Champions League. It’s a knockout game so it will be two finals.

“I think we know Klopp and we know his style. He knows Bayern Munich as well. No one is in a better position. We know him, he knows us.

“Yes, they have very good, fast breaks and aggressive counter attacks but we know that. We saw how they play against teams.”We have to stay compact and have a good plan then we will have good protection for our defence.”