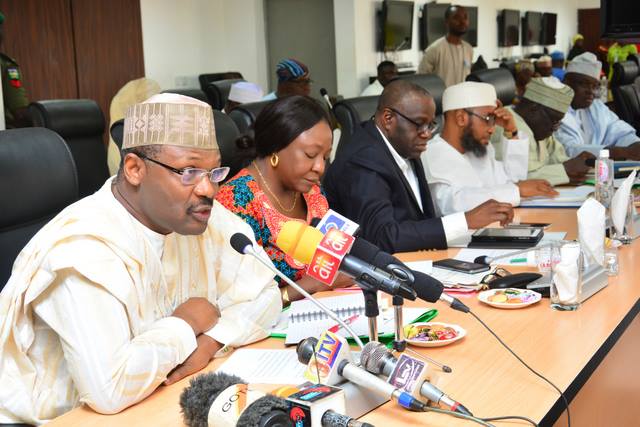 Members of staff of the Independent National Electoral Commission (INEC) in Adamawa State were yesterday sworn to an oath of secrecy to be neutral in the conduct of the 2019 elections in the state. Resident Electoral Commissioner in the state, Kassim Gaidam, who addressed the staff before the administration of the oath, said they were expected to be neutral in their dealings.

Gaidam, said “We are gathered here today to administer this oath on me, management, electoral officers and other staff of INEC in the Adamawa office of the commission.” INEC, he pointed out, would endeavor to conduct the 2019 general election in the most efficient and professional manner, based on global best practices.

He assured his audience that INEC was interested in ensuring due process in the election and was not concerned with who emerges winner, provided the mandate of the people was guaranteed and reflected in the outcome. Gaidam stressed further that INEC shall avoid and resist undue external interference or influence in the conduct of the elections.

The REC also conveyed the commission’s sincere apologies to all residents of the state on the rescheduled elections, which he said may have dampened their spirit. He urged the people to come out in their numbers on the scheduled dates. Efforts he said were being made to address logistic challenges that necessitated the postponement.

The REC chairman also assured that INEC had since reconfigured all the smart card readers to reflect the new dates for the elections and also stressed that ad hoc staff were being retrained so as to enhance service delivery. He assured that all sensitive materials deployed to the 21 local government areas had been returned to the Central Bank of Nigeria (CBN).