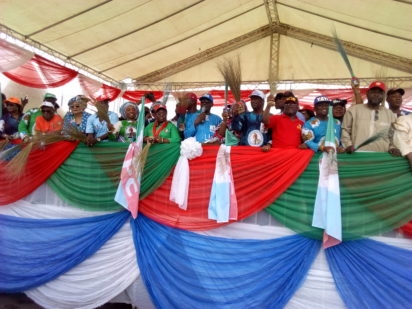 All Progressives Congress’ members and supporters in their large numbers in some parts of Ekiti on Sunday trooped out to celebrate as news trickled out that the former House of Representatives and one-time Lagos State Commissioner for Information, and APC senatorial candidate in Ekiti Central, Mr Opeyemi Bamidele, won the senatorial seat.

The News Agency of Nigeria’s Correspondent who monitored the situation reports that wide jubilation was witnessed in Ado Ekiti, the state capital, Iyin Ekiti and Igede Ekiti, among others.

His election was declared by the INEC Presiding Officer for the Senatorial District, Prof. Jeremiah Omotola.

This brings the number of House of Representatives seats so far won by the APC to three, out of the six available seats in the state.

Fatoba won with 55, 483 to defeat his close rival, Mr Ayodele Oladimeji, of the Peoples Democratic Party (PDP), who scored 27,836 votes.

NAN reports that Bamidele, who was in the lower chambers of the National Assembly between 2011 and 2015, as a member of the House of Representatives, and later as the governorship candidate of Labour Party, scored a total of 94,279 to trounce the PDP, candidate, Mr Obafemi Adewale.

NAN recalls that during Bamidele’s time at the House of Representatives, he was the chairman, House Committee on Budget and Research.

As soon as news filtered into town, Bamidele in company of party supporters stormed Iyin Ekiti, his hometown to celebrate with the electorate.