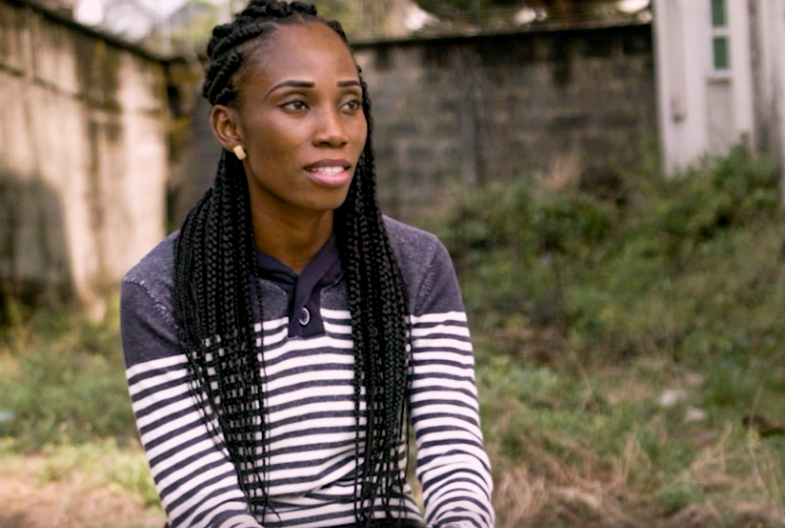 As a single mother, life was tough for her. She had been forced to drop out of the university in her final year because of certain difficulties. When the opportunity presented itself for her to leave the country in search of a better life, Chillian jumped at it without a second thought. She was to find out much later, that she had made a huge mistake.

She shares her story in this eye-opening interview

What made you decide you were going to take the trip?

It was because of the academics. As at the time I discovered there was nothing else I could do, I was moved and felt if I leave the country and go out there, I’ll be able to study again. Also, things became difficult in my family. A lot of financial challenges. And I have a son. So, when I looked at the challenges I had and the responsibilities, I decided to travel.

Whom did you speak to about helping you leave Nigeria?

I didn’t actually approach any agent. It was my cousins outside the country. I have two cousins in France and one in Italy. The ones in France sent message home that they needed four persons from the country they wanted to assist, but on a condition. Once you come over and you start working, you would pay them N8million. I was interested because I was confident that whatever job I get there, I would use it to offset the bill.

How easy was it sourcing for funds for the trip?

The only money I put together was the money I used to travel from Delta to Benin to meet my cousin who was preparing for the journey. Also, money for feeding, because I was told that the journey was for a few days.

Tell us about your journey. Where did it commence?

I left from Benin to Kano. Initially, we were told we were leaving from Benin to Abuja, but when we got to Abuja because, they had already taken our phones away, I couldn’t reach my family. It was when we got to Kano that I discovered that it was an illegal journey. The guys we met, first of all, had to give us hijab to cover ourselves, to pretend that we were Muslims. I started noticing funny movements. They put us on a bike to take us through to the border. The movement of the bike men, avoiding the police, not using the right paths, going through the bushes, made it all suspicious. At some point, they took us to a building where they hid us until the evening. It looked like they already had a vehicle arranged. They took us back to the border. When we got there, we were searched. Before this, they had given us fake documents. Mine was bearing my picture, but not my name. The smugglers said I was already there and couldn’t do anything. If I spoke too much, they would lock me up. So, I had to stay silent.

At the border, they checked our documents. I had to cram my fake name. When I was asked what name was on the paper, I recited it. Our papers were given to us and we were asked to leave. When we got to where the vehicle was, we were about 30 or more in a small vehicle. I had to sit in the boot. I didn’t have any choice. We were treated like animals. I was a bit confused, but I was just watching. They moved us. They were still avoiding the police as they approached the next country. They got to a certain point. They dropped everyone and ran off. We were asking what was wrong but no one answered. An hour later, another vehicle came. They started calling passengers. The man amongst four of us knew whose passenger we were because he already knew the route. They put us in the vehicle. Two days later, we got to Agadez where we spent three days. They moved us to another building that was worse than where we were before.

They told us to get ready to leave and get water ready. I was wondering why we needed water because they asked us to get a big keg. We had to sell the phone we had to buy the keg, so no more communication. They prepared us and brought a Hilux truck. From the connection we used, we had about nine trucks that left that venue through the desert. Each Hilux had about 30 people. They gave us sticks around the truck to hold so that you don’t fall off. The people sitting inside suffered the most because there was no air. You are sitting tightly and you can’t tell anyone to adjust because there is no space. We had water pouring on our bodies. I sat on the keg of fuel and got burnt, but I couldn’t do anything. I treated it during the next stop with olive oil.

I spent a month and three weeks in the desert. They kept handing us from one driver to another. At some point, we were caught by the police in the desert and taken back to Dirkou. We were held for four days. On the fourth day, they told us they would take us back to Nigeria. My friends with me reasoned together and said, “How can we be this crazy to go back through the same means we came? We’ve already suffered. We’ve passed through a lot. We have to run.” It wasn’t easy for me. I was thinking, the first time we were caught, I saw guns with my eyes. I was scared that if they caught us again, who knows what they would do to us. The guys said, “Don’t worry. You’ll be fine.” So, we had to run. Then we ran into trouble. We met another driver who told us he would help us. We jumped into his vehicle and he sold us. We had no idea. From there, we were taken to Libya. In Qatrun, an Igbo man bought us.

What was your experience in Libya?

Before we left Nigeria, we were given garri without sugar or milk, and a packet of cabin biscuit. Before one month, it finished. The major problem I had was water. I am someone who endures hunger. My problem basically was water. It got to a point, I almost fainted. I was crying and was also losing strength. After about 30 minutes, I noticed I wasn’t seeing clearly. I knew something was happening to me. But the driver came to our rescue and gave us water. Now, at Qatrun, the Igbo man took us to his house, gave us water to bathe and welcomed us to Libya like he was friendly. So, I felt at ease, but I never knew that it was trouble calling. I heard him talk to someone in Igbo and knew he was Igbo. After three hours of getting there, he called us to sit around him.

“Do you know why you’re in Libya?” he asked. I didn’t know why I was in Libya because that was not my destination country. I didn’t say anything. We were all looking at him. At some point, he gave a signal to one of the guys who was standing beside him. They went upstairs and brought guns. The man had a lot of guns. Real big guns. I was surprised. They gave him one and he shot into the air. In the room. Because there is a way Libyan buildings are. They have strong walls. It took me about 3-5 minutes to recover from the shock of the shot. I was the first to say I know why I was in Libya. Because of the shock of the shot. He gave us few hours to get N300, 000. He threatened that if we didn’t bring the money within the duration he gave us, he was going to sell the ladies into prostitution. And for the guys, it was whatever. I knew this was trouble. We had to start calling and they sent the money to bail us. Once they gave us the money, he moved us from his house to Sabha to meet the connection man, because once you pay your money, you’re free to go. The connection man took care of us for about two days, but I got uncomfortable and told them I wanted to go, because I had noticed some funny movement. I didn’t know what the man had planned for us. The man acknowledge that he knew we wanted to go, but we had to wait for a while because they were having some issues at the Mediterranean seaside. But out of stubbornness, I insisted. He said, “You know you’re very stubborn. Calm down. There’s a reason why I’m saying you should wait.” I told my cousin that if they don’t move us, I’ll raise an alarm.

They said it wasn’t safe, so they had to move us. From Sabha to the seaside, Sabratha, took four days. They had to wait for passengers. I saw a lot of things, especially one night when a guy from Sudan brought 5dinar. I was sleeping, covering myself. Someone was tapping me. I woke up and looked at him giving me 5dinar to sleep with me. That is about N500. I screamed and it woke everyone up. They asked what was going and I told them. They shouted on him. I really saw a lot of things. So many of our ladies, because of hunger or one or two difficulties would give in to those men. These things made me angry and restless. I just wanted to leave Libya. One other thing I discovered how unsafe it was for pregnant women. Some of them delivered in such situations. I was devastated. I was feeling so sad. I was always crying. I was not happy until we go to the seaside. At the seaside, we spent one month and a few days. No pushing. They said whenever they push people to the sea, they catch the boat and send them back to Libya. Because of that, the connection men told us to wait. So, few days later, the Libyan police came and arrested all of us and detained us.

I was in prison for three months. It was horrible. No food. No good food. At first, we were more then 4000 in my cell, so it wasn’t easy to feed. There’s a bread they have in Libya. A loaf of it cannot feed a baby, but we were made to share three-to-one, two-to-one. And then, at some point, they started preparing rice, sometimes macaroni. Food that you give to the dog. I don’t know how they mix it. They just mix it and bring it. Sometimes, I won’t be able to eat it. Sometimes, if I eat their rice, for three days I won’t recover because of sore throat. A lot of difficulties. And then, they treat black Africans like animals. The way they talk to you… When they want to tell you to sit down. They don’t even say it. They beat you. So, it was really difficult.

How did you return? Did you get help from anyone?

We didn’t contact anyone. The International Organization for Migration came to visit us and asked who was interested in going back home to Nigeria. I registered and then they brought us back home.